Firefighters are battling a blaze, believed to have started by a vehicle fire, that has quickly spread to at least 1,200 acres near Lake Piru.
KABC
By ABC7.com staff 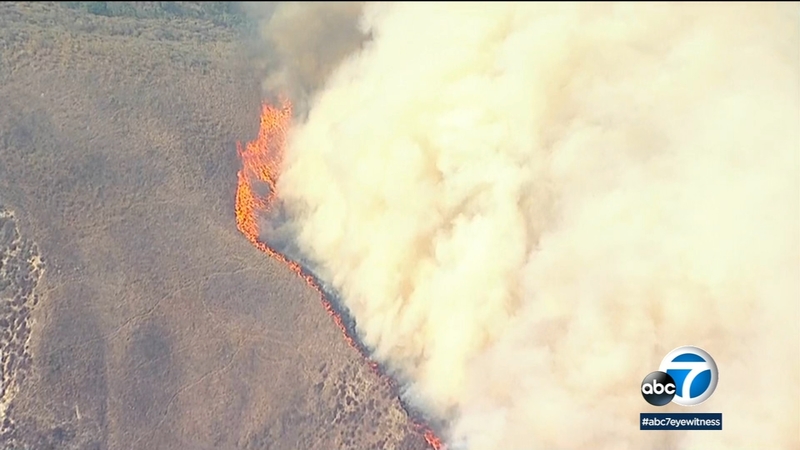 PIRU, Calif. (KABC) -- An evacuation warning was issued as firefighters battled a brush fire that quickly spread to at least 1,200 acres near Lake Piru.

It is believed the blaze was started by a vehicle fire that spread to nearby brush. It was initially listed at about a quarter of an acre, but quickly scorched hundreds of acres as it spread in light fuel and hot, dry conditions.

Named the Holser Fire, the blaze was first reported around 2 p.m. on Holser Canyon Road off of Piru Canyon Road, near a shooting range.

#HolserFire; fire is approx 250 acres @VCSOVentura is assisting with voluntary evacuations in the fire area. As of now there are 26 residences being evaluated. Go to https://t.co/lZ7sT3kXmB for up to date evacs and road closures. @VCFD @CountyVentura pic.twitter.com/xWLrYEHy5a

An evacuation warning was issued for Piru Canyon Road: north to Lake Piru, south to Highway 126, east to the LA County line and west to Piru Canyon road.

At least 26 residences were being evacuated. At least one structure was believed to be under immediate threat.

A temporary evacuation center was opened at Fillmore Middle School.

Two firefighters suffered minor injuries and one resident was evaluated for medical treatment and released.