A woman who was struck by a police cruiser during a protest in downtown L.A. says her attorney is filing a government claim against the city and the LAPD.
KABC 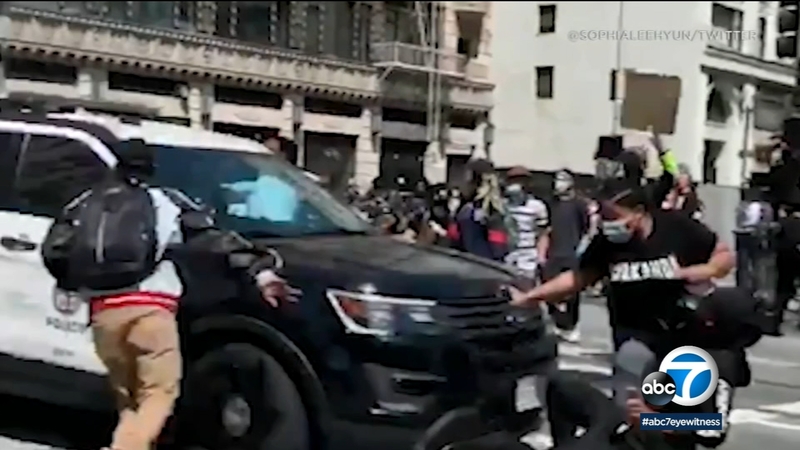 Protester struck by police cruiser in DTLA speaks out

DOWNTOWN LOS ANGELES (KABC) -- A protester who was run down by a police cruiser in downtown Los Angeles is speaking out about the moment that was caught on video.

Video from a protest last Sunday near Pershing Square shows an LAPD vehicle hit at least two protesters. The video then shows the police SUV back up and speed away.

"Obviously it happened so fast, but I got knocked down and the adrenaline - I bounced back up," said Brooke Fortson, one of the protesters hit.

Amid the chaotic crowds in downtown Los Angeles, video shows several pedestrians surrounding a police cruiser and two of them getting struck as the SUV tried to escape.

Fortson, who calls herself a community activist, is seen in video wearing a black mask. She says she was taking a photo of protesters, heading back across the street when she says the officer accelerated and then hit her. She was thrown about a dozen feet.

"It's still surreal, even seeing it happen to myself," Fortson said. "It's surreal."

Her attorney is filing a government claim against the city of L.A. and the LAPD, a first step toward a potential lawsuit.

"They're peacefully protesting police brutality and police murder and then for an officer to take his vehicle and engage in an act of police brutality by accelerating into them, that's wrong and we intend to get justice in the courts," said her attorney James DeSimone.

Fortson says she is still suffering neck and back pain. Her attorney says they have not yet learned the name of the officer behind the wheel.