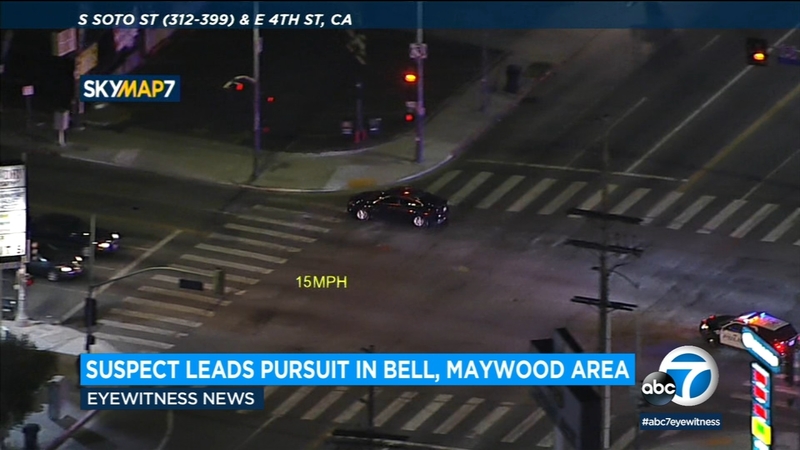 LOS ANGELES (KABC) -- A suspect was taken into custody after leading police on an hourslong chase in the Gateway Cities area of Los Angeles County Friday night.

AIR7 HD was over the pursuit at around 10:30 p.m. as the suspect was driving at moderate speeds on surface streets in South Gate with Bell police chasing.

At times, the suspect would drive erratically - running red lights and driving on the wrong side of the road.

A dangerous moment during the chase came when the suspect was at an intersection and made a U-turn to evade multiple police vehicles.

A suspect was leading police on a chase in the South Gate area Friday night.

Police came close to stopping the suspect when the driver turned into a parking lot near Gage and Otis avenues and managed to narrowly pass a police vehicle that appeared to stop right in front of the moving car.

The suspect moved through several cities, including Maywood, Vernon and in the East L.A. area.

AIR7 HD left the chase around 11:50 p.m. as the suspect got on the southbound 710 Freeway and continued leading police on the chase. At around 12:20 a.m. Saturday, the pursuit ended near Atlantic and Florence avenues with the suspect in custody, according to the California Highway Patrol.