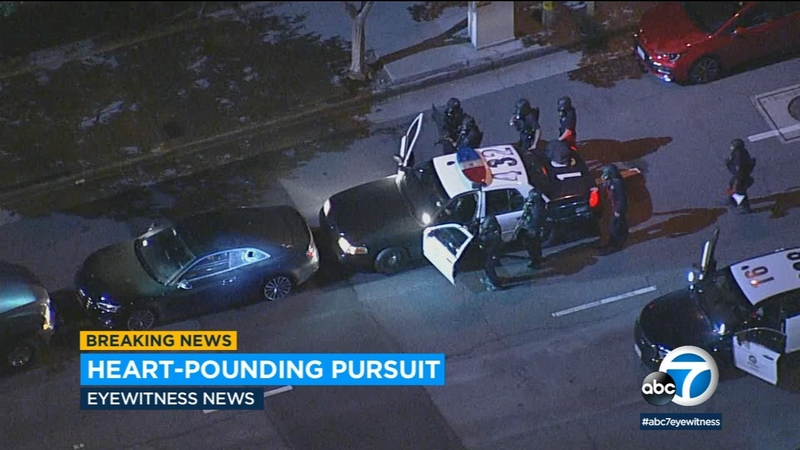 LOS ANGELES (KABC) -- A driver that led police on a lengthy chase through the San Fernando Valley before barricading himself inside a possibly stolen Audi was taken into custody Monday night.

Multiple LAPD units followed the vehicle from the Arleta area over surface streets and then south down the 5 Freeway until the driver exited at Alameda Avenue in the Burbank area.

The driver continued to drive over surface streets in the Burbank area, stopping for lights and mostly following speed limits. At one point a male passenger exited the vehicle and surrendered, but the black Audi then kept driving.

At another point, the Audi entered a cul-de-sac with at least three units behind, but the officer did not make any attempt to block the vehicle in. The car circled around the cul-de-sac and then drove past the police units to continue the chase.

Officers also appeared to try to overtake the vehicle to perform a PIT maneuver, but each time the car sped up to avoid the tactic.

The tires shredded off a black Audi after it ran over spike strips during a police chase through the San Fernando Valley but the driver kept going.

After more than 45 minutes into the chase, it appeared at least one of the Audi's tires ran over a spike strip, but it did not slow the vehicle down.

It ran over additional spike strips and a few minutes later the tires started smoking. One-by-one the tires shredded and fell off the vehicle. The Audi spun out more than once, but then continued driving on rims, maintaining speeds well over 50 mph.

The chase continued for close to two hours.

A drive in a possibly stolen Audi led police on a lengthy chase through the San Fernando Valley Monday night.

A driver that led police on a lengthy chase through the San Fernando Valley before barricading himself inside a possibly stolen Audi was taken into custody Monday night.

By around 8 p.m. the driver stopped in La Crescenta on Foothill Boulevard. But the driver remained barricaded in the vehicle as officers tried to persuade the driver to surrender. They fired non-lethal projectiles into a back window.

Shortly after 9 p.m., authorities boxed the car in but it took several minutes before the driver opened the car door and surrendered. He was taken into custody without further incident.