President George H.W. Bush remembered as 'Superman' by former Army sergeant who jumped out of plane with him 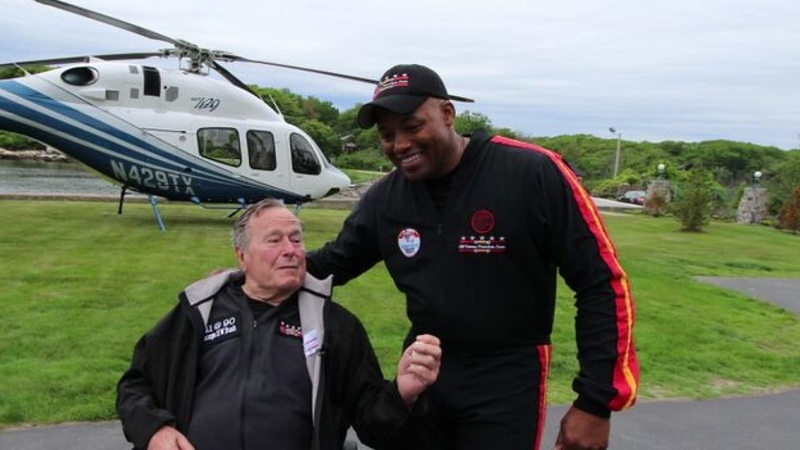 As the nation remembers President George H.W. Bush, one man is sharing his special moments with the fearless and adventurous former president and veteran.

Sgt. 1st Class Mike Elliott was a former member of the Golden Knights parachute team for the Army and described his memories of Bush after first meeting him during a rededication of the Bush Library in College Station.

That was the day Elliott jumped out of a plane with the former president.

Elliott said Bush didn't want to tell his family about the jump, especially Barbara. But she found out the day before and jokingly told Elliott that he better not hurt her husband or else.

Bush grew a friendship with Elliott and when the former president wanted to jump out of a helicopter again, he asked that Elliott jump with him.

In honor of his 90th birthday, the former president jumped out of a plane - again

In 2014, president Bush celebrated his birthday by fulfilling the goal of jumping out of a chopper in Maine.
"That's what he wanted for his 90th birthday and that's what he got," Elliott said.

Elliott said Bush's family and doctor objected to the idea, but eventually got them to agree.
Elliott described his jump with Bush as a "very good feeling to be involved and be able to turn back time."

Elliott also added that when the president's family agreed to the skydive plans, Bush was smiling "like a kid in Kindergarten."

The first time Bush jumped from an airplane was when his plane was shot down in World War II over the Pacific.

He marked his 75th, 80th and 85th birthdays by skydiving. The jump for his 90th birthday was his eighth jump.

FINAL FAREWELL: President Bush to be laid to rest in College Station

Elliott said he was shocked when he found out Bush had passed away Friday.

"It's hard to visual that Superman is going to the next place. I kind of looked at him as an iconic American hero, that he was going to be here forever," Elliott said. "You think about the cartoon character Superman as saving the world, being this world leader and being this man of steel. He (Bush) is the true, the real superman. You look at what he's done: a veteran at 19, shot down and going on to be a world leader, Yale, in Houston making his own money, the CIA, and former president. That's superman in my book. A true world leader. He doesn't wear a cape with a big 'S' on his chest. In my mind, that's how I envision 41 - Superman."

What to expect in days to come for George Bush services.

SEE ALSO: 'I love you, too' were George H.W. Bush's final words

"I love you too" are George Bush's last words.

RELATED: George and Barbara Bush: A love story for the ages