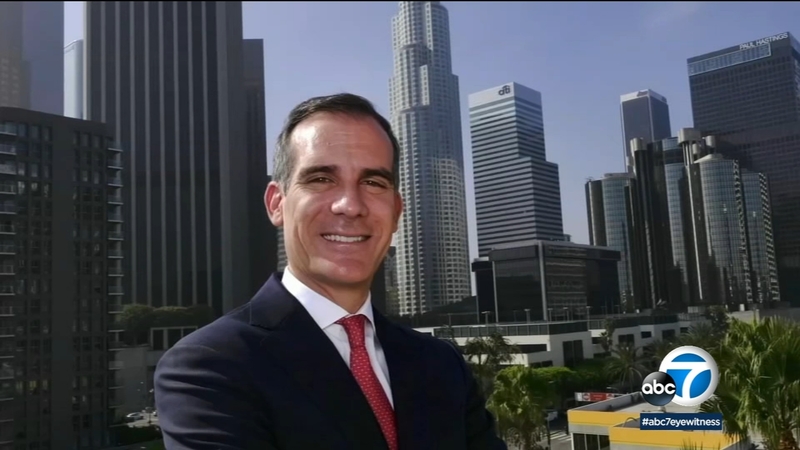 LOS ANGELES (KABC) -- A report by Axios that Mayor Eric Garcetti is one of several under consideration by the Biden administration to serve as the U.S. ambassador to India shouldn't come as a surprise, as we've been down this road before.

But, the timing of a potential job offer now that the pandemic has improved in Los Angeles makes sense to those inside and outside city hall.

"I think people place bets on whether he's going to serve out this term," " said Jessica Levinson, a Loyola Law School professor. "My guess is that the answer at this point is probably not. We've had a couple of these false starts. Will he run for president? No. Then he serves as a major part of the Biden campaign. Will he be a cabinet member? No."

And although crime is up and the homeless crisis is worse than it was before the pandemic with the city facing a serious federal lawsuit, Garcetti only has a year and a half left on his term and is certainly considering what to do next.

"The mayor is a relatively young person, and he's an ambitious person and he has a good resume," Levinson said. "He has to be looking around L.A. and looking around California and figuring there's only so many political seats at the table, and maybe what move can put him on a national and or international stage. This is one of those moves."

In a statement, Garcetti's spokesperson said, "These reports are speculative. We aren't going to engage in speculation. We're 100% focused on ending the COVID pandemic and passing a justice budget for the city."

City Attorney Mike Feuer and City Councilmember Joe Buscaino have already announced they're running for mayor in 2022. If Garcetti leaves his term early, the city council could hold a special election, although that's expensive, or they could appoint a caretaker to fulfill the remainder of the mayor's term.

"I don't want to speak for Mayor Garcetti, but I know as a friend that he loves this city. He's been committed to this city for many, many years. But, if there's an opportunity knowing that his term is up next year to represent not only his city, but his country, at a global stage, I think he ought to look at that," said Buscaino.

Why Garcetti for India? The country is in the middle of a devastating COVID-19 surge, which Garcetti has experience addressing. Plus, the Biden administration has signaled India's importance on the international stage in terms of dealing with China.