2020 Election: Hispanics could be largest minority group to vote at 32M nationwide

While Hispanics could be the largest minority group to vote this election, in the past five presidential elections 2.5 million eligible young Latinos in California didn't vote.
KABC
By Eric Resendiz and Grace Manthey 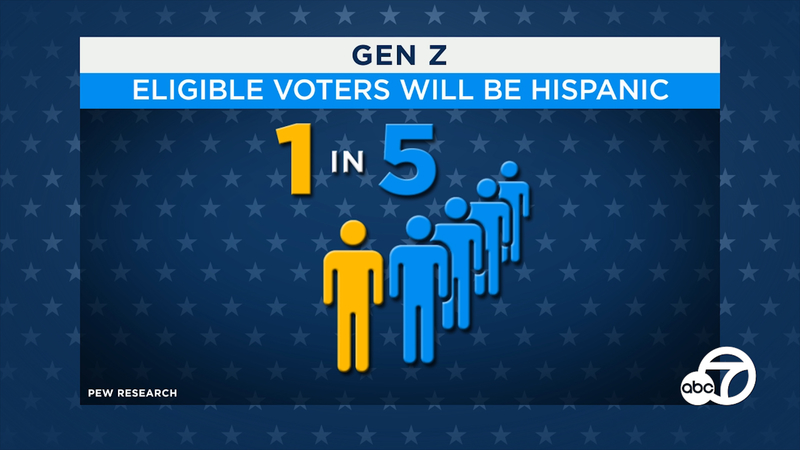 Hispanics could be largest minority group to vote this election

EAST LOS ANGELES (KABC) -- For the first time ever, Hispanics are expected to be the largest minority group eligible to vote at 32 million nationwide.

That's according to the Pew Research Center, which also found that this year one in five Gen Z voters will be Hispanic.

"I think it's hopeful, right? You hear that number? And it's just like, wow, that'd be amazing," said Orlando Martinez, the educational justice parent organizer at InnerCity Struggle.

For the past 10 years, nonprofit organization InnerCity Struggle has been mobilizing the Latino vote in the East Los Angeles area through phone banks and distributing voter guides, and most recently through text messaging campaigns.

"The Latinx community as a whole is expected to be a decisive force in the upcoming elections. And we have a very young demographic in the Latinx community," said Henry Perez, associate director at InnerCity Struggle.

East Los Angeles is part of Congressional District 40, which in 2018 was the district with the largest share of eligible Latino voters in the country, according to Pew Research.

"We constantly hear that, if all Latinos went out and voted, our cities, our government would look so different. But conversely, you kind of have to take it with a grain of salt just because historically, Latinos have not come out to vote," said Perez.

In the past five presidential elections, a total of 2.5 million eligible young Latinos in the country didn't vote, and in 2016 more than 550,000 didn't vote, according to an ABC7 analysis of the U.S. Census Bureau's Current Population Survey.

Some experts said one of the most common reasons why Latinos don't vote is because of the lack of communication.

But there are signs the trend is changing. In the 2018 midterm election, young Latino voters in California had the highest share of votes of any midterm election since 1978.


Graph not displaying correctly? Click here to view in a larger window.

ABC7 analyzed voting trends among young people between 1976 through 2018.

Perez said reaching young Latinos through technology helps get the word out.

"We also implement a lot more social media strategies," said Perez. "We want to encourage voters to see that locally, they really have the power, the potential to build electoral and community power."