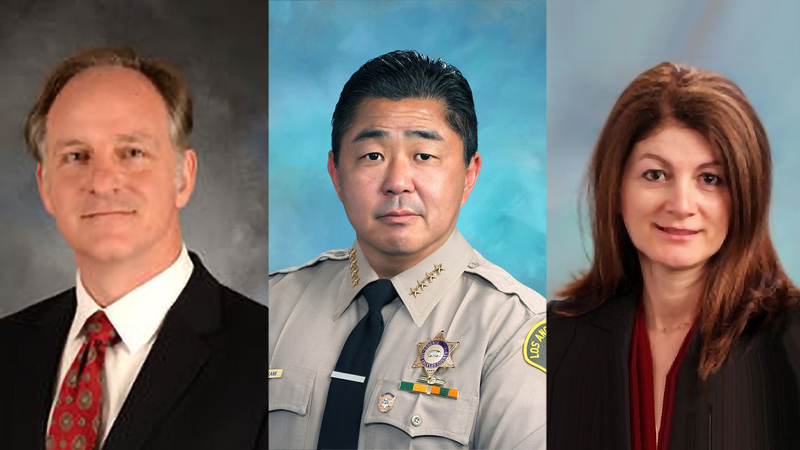 LOS ANGELES (KABC) -- The Los Angeles County Sheriff's Department is being criticized for launching a criminal investigation into the watchdog agency that oversees the department.

Huntsman's job as inspector general is to provide independent oversight of LASD by monitoring the department, including personnel and disciplinary files, causing some to wonder if the criminal investigation is an attempt at intimidating Huntsman and the Office of Inspector General.

"Speaking for myself, I don't see anything in it but intimidation," L.A. County Supervisor Sheila Kuehl tells Eyewitness News. "It is very interesting for the sheriff to do a criminal investigation of the body appointed by the board to oversee him."

Murakami says Teran downloaded the confidential personnel records for Huntsman and the OIG a few days before Villanueva was sworn into office last December.

"You know, we want to have an open relationship with them, but there also has to be a trust factor," Murakami tells Eyewitness News. "We're not afraid of people looking over our operations, but it has to be done in the proper manner."

Huntsman says a county ordinance gives his office the legal right and the responsibility to inspect those files.

"We have a county ordinance that says I'm permitted to ask any county employee for records and they have to share them with me," says Huntsman. "We're required to keep them confidential -- so we don't put out confidential information -- but we're allowed to see the whole picture, so we can get a good view of things and that includes the sheriff department's personnel records."

"That code doesn't give him (Huntsman) free rein to look at anything," says Murakami. "The problem with him is that he's actually violating the law. He may think he's doing a good thing, but you can't violate a law in order to enforce a law."

The dispute is the latest twist in an ongoing fight between Sheriff Villanueva and the OIG.

The OIG released a public report on Monday that accuses the sheriff's department of limiting the office's access to internal files, barring them from meetings they'd previously attended and not notifying the OIG about decisions to reinstate employees previously fired for misconduct.

"This failure to comply with County Code section 6.144.90 has significantly impaired the ability of the Office of Inspector General to monitor the Sheriff's Department's operations and report publicly on its findings," the report said.

"In the past such secrecy has resulted in a Sheriff misusing law enforcement powers in an effort to stifle critics through intimidation of an outside agency investigating the Department," the report said -- a reference to the federal convictions of former Sheriff Lee Baca and former Undersheriff Paul Tanaka for obstructing an FBI investigation into abuse and corruption inside L.A. County jails.

Huntsman warned the Board of Supervisors at a public meeting last month to what he called the "bunker mentality" being adopted by the sheriff's department.

"I was hired in part to tell you if we ever faced a Tanaka-level crisis again," Huntsman told the supervisors. "We face it now."

Eyewitness News asked Huntsman if he drew any parallels between the intimidation of an FBI agent in the Baca-Tanaka corruption scandal and the current criminal investigation of him and his office.

"It does feel a little bit like history repeating itself, given what happened before I was hired," Huntsman said. "But it's too early to say. Talk is cheap, and so we'll see what actually happens. I hope this gets resolved in a way other than the way the sheriff is implying."

"If it was a deputy sheriff under investigation, we'd move him to another assignment just to protect the integrity of the unit and investigation," Murakami told Eyewitness News.

Sheriff Villanueva has recused himself from the investigation, according to a "designation letter" obtained by Eyewitness News that authorizes Murakami to act as Villanueva's "surrogate in all decisions" related to the case.

The County Board of Supervisors met in closed session Tuesday evening to discuss the matter. Kuehl tells Eyewitness News that the supervisors unanimously agreed to not reassign Huntsman or anyone else for now.

Instead, the board is calling on the entire sheriff's department -- not just Villanueva -- to recuse itself and engage an independent third-party agency, like the FBI or the California attorney general to lead the investigation.

"The Board appreciates that the Sheriff has recognized the importance of avoiding even the appearance of impropriety by recusing himself from this investigation," according to a letter sent to Murakami Tuesday evening.

"The Board knows you can appreciate the apparent conflict of interest and the inappropriate message it sends to the community to have the LASD investigate the OIG, given that the OIG's sole purpose is to monitor and investigate the LASD," reads the letter.

"We think it would make a lot more sense and look better if there was an independent investigator," Kuehl tells Eyewitness News. "If you're looking at potential criminal charges, it is very interesting for the sheriff to do a criminal investigation of the body appointed by the board to oversee him."

In a statement Wednesday, Supervisor Mark Ridley-Thomas told Eyewitness News, "I find it extremely disturbing for Sheriff Alex Villanueva to investigate the watchdog agency whose sole purpose is to oversee his Department. There is an inherent -- and frankly blatant -- conflict of interest, which makes me wonder about his motives. If there is to be an investigation, the only way to do it with any credibility is through a third party."

Murakami denies that the department is shutting down the OIG's access to monitor the department, instead saying they're just making sure the OIG is "playing by the rules" set out in a "Memorandum of Agreement" between the department and the OIG on the sharing of confidential LASD information.

The downloading of the confidential LASD files first publicly surfaced in civil litigation between the county and the LASD over the rehiring of Deputy Caren Carl Mandoyan, who was fired by former Sheriff Jim McDonnell for alleged domestic violence, stalking and lying.

According to a declaration filed by a LASD detective in that case, the files include "78 documents from 22 unique LASD employee case files" and include "approximately 2000 pages of case files related to Sheriff Alex Villanueva."

The declaration states that the files were downloaded on November 28th, 2018 and include the "case files of at least eight current and former LASD executives."

Eyewitness News obtained emails sent by Huntsman to the Board of Supervisors outlining how and why he says the files were downloaded for "a lawful purpose" for the OIG.

"In November of last year, OIG renewed a request to LASD for copies of secret IA files. Although we had been told we had complete access to IA files, we learned that a small group of cases had been made invisible in the records system to anyone outside internal affairs, including us," reads the email.

"We exchanged emails with Chief (Alicia) Ault on the subject and ultimately, I personally conveyed the request to the sheriff. The request was particularly urgent because we were concerned the new sheriff might direct the alteration or destruction of discipline records. Diana Teran was tasked with providing us electronic documents authorized by the sheriff, including records of Alex Villanueva's disciplinary history. We received these records pursuant to our ordinance and have maintained them securely," reads the email.

Huntsman tells Eyewitness News that the files were provided to his office under the same procedure that's been in existence since the creation of the OIG, and "now he wants to say that's a crime and I think that's inappropriate."

Murakami points to the timing, days before Villanueva was sworn into office in early December.

"It's kind of funny that he'd do it just before the change of administration," says Murakami. "That kind of stinks, too. If it did in fact happen, when the new boss is coming in... all of a sudden, I'm going to release all this stuff to you. That sounds a little awkward."

Eyewitness News has been unable to reach former Sheriff McDonnell or Diana Teran, who went to work for the OIG for several months after leaving her position as LASD's Constitutional Policing Advisor. She now works as a Law Enforcement Accountability Advisor for the L.A. County Public Defender's Office, according to her LinkedIn page.

Teran's replacement, current LASD Constitutional Policing Advisor Georgina Glaviano, tells Eyewitness News that the county code cited by Huntsman does not give his office full access to the confidential files.

"To view a file is one thing, but to take a copy or remove it from where you are, is not OK," says Glaviano.

Huntsman says it's not his place to speculate about whether or not the LASD's criminal investigation is an attempt at intimidation, but calls the situation "unfortunate."

"My job is to publicly report and to obtain information," says Huntsman. "That's what I was brought in to do. So I have to do what I'm charged with... whether there are consequences or not. It's my job."