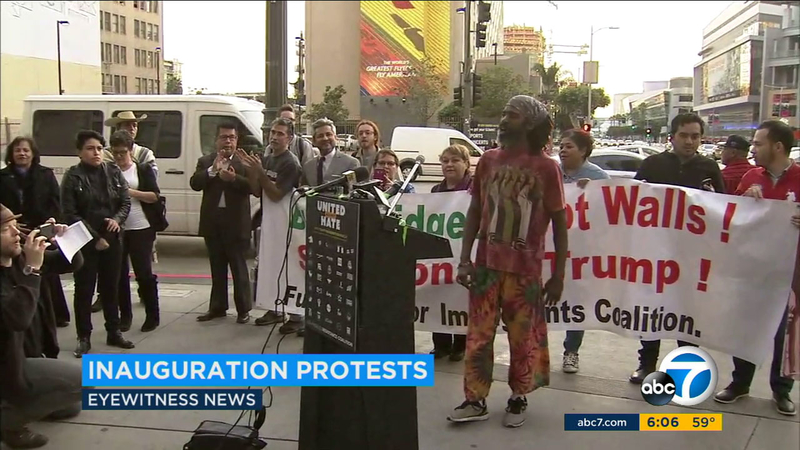 LOS ANGELES (KABC) -- Thousands of people are expected to take part in protests against the new administration of President-elect Donald Trump on inauguration day, Friday.

One major protest will be in downtown Los Angeles at the Staples Center, where more than 90 groups are expected to take part in a massive march and protest.

Organizers are asking people to miss work and school on Friday to participate in the protests. Among their demands are no mass deportations, no racism and respect for African-American communities under the Trump administration.

Members of Southern California religious and community organizations also expressed their commitment to make their places of worship a sanctuary during the Trump administration.

Many said they will resist Trump's policy proposals that target undocumented immigrants and discriminate against Arab, Middle Eastern, Muslim and South Asian communities.

"In three days a new administration is going to take over, an administration that includes members who have engaged for many years, not just during the election campaign, in demonizing, in dehumanizing many members of various communities in our country," said Hussam Ayloush, executive director of the Council on American-Islamic Relations.

Marvin Ruiz, an undocumented immigrant, and his wife fled Honduras after she was stabbed and shot when they didn't pay a "war tax" imposed by violent gangs. Now they worry about being sent back to Honduras under a Trump administration.

"We find ourselves not able to sleep these days because we hear about lists of deportation and we wonder if we are on those lists," Ruiz said.

"We start with sanctuary with the notion of noncooperation, but it goes beyond that to every bone of our bodies fighting for justice," Klein said.
Related topics:
politicslos angelesdonald trumpprotestimmigration
Copyright © 2021 KABC-TV. All Rights Reserved.
TOP STORIES
Search resumes for Brian Laundrie in Gabby Petito case
Heat advisories issued for most of SoCal on first day of fall
Movie and film workers might be headed toward a strike
California struggles to conserve water amid historic drought
Growing scam targets Bank of America and Zelle customers
Woman safe after video of possible abduction in Bell Gardens
When to expect decision on COVID-19 vaccine boosters
Show More
Who is running for mayor of LA? Here are the top contenders
Anti-Black bias events most prevalent in 2020: CA attorney general
Suspects in Kristin Smart disappearance to face trial
Willie Garson, known for 'Sex and the City,' dies at 57
Officials: Many Haitian migrants are being released in US
More TOP STORIES News