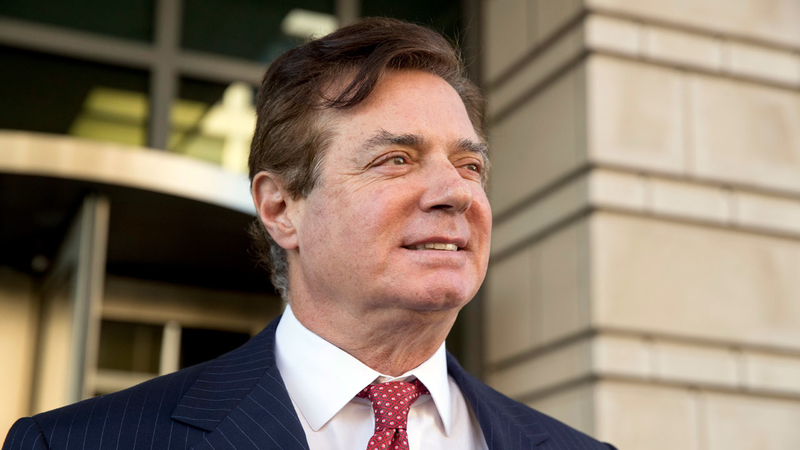 WASHINGTON -- Special counsel Robert Mueller is accusing former Trump campaign chairman Paul Manafort of lying to federal investigators in the Russia probe in breach of his plea agreement, an extraordinary allegation that could expose Manafort to a lengthier prison sentence - and potentially more criminal charges.

The torpedoing of Manafort's plea deal, disclosed in a court filing Monday, also results in Mueller's team losing a witness from the top of Donald Trump's presidential campaign who was present for several key episodes under investigation. That includes a Trump Tower meeting involving Donald Trump Jr. and a Russian lawyer he was told had derogatory information on Democrat Hillary Clinton.

In the new filing, Mueller's team said that after Manafort agreed to truthfully cooperate with the investigation, he "committed federal crimes" by lying about "a variety of subject matters." Prosecutors said they will detail the "nature of the defendant's crimes and lies" in writing at a later date to the judge.

Through his attorneys, Manafort denied lying, saying he "believes he provided truthful information" during a series of sessions with Mueller's investigators. He also disagreed that he breached his plea agreement. Still, both sides now agree they can't resolve the conflict, and U.S. District Judge Amy Berman Jackson should set a date to sentence him.

Manafort, who remains jailed, had been meeting with the special counsel's office since he pleaded guilty in September to conspiracy against the United States and conspiracy to obstruct justice. He cut that deal to head off a second trial after being convicted last summer of eight felony counts related to millions of dollars he hid from the IRS in offshore accounts.

Both cases stemmed from his Ukrainian political work and undisclosed lobbying work he admitted to carrying out in the U.S. in violation of federal law.

As part of his plea agreement, Manafort pledged to "cooperate fully, truthfully, completely, and forthrightly" with the government "in any and all matters" prosecutors deemed necessary. He also forfeited many of his rights as well as his ability to withdraw the plea deal if he broke any of the terms. In return, prosecutors agreed to not bring additional charges against him and to ask a judge for a reduction of his sentence if he provided "substantial assistance."

But with prosecutors saying he breached the agreement, Manafort now faces serious repercussions such as the possibility of prosecution on additional charges, including those prosecutors dropped when he made the deal.