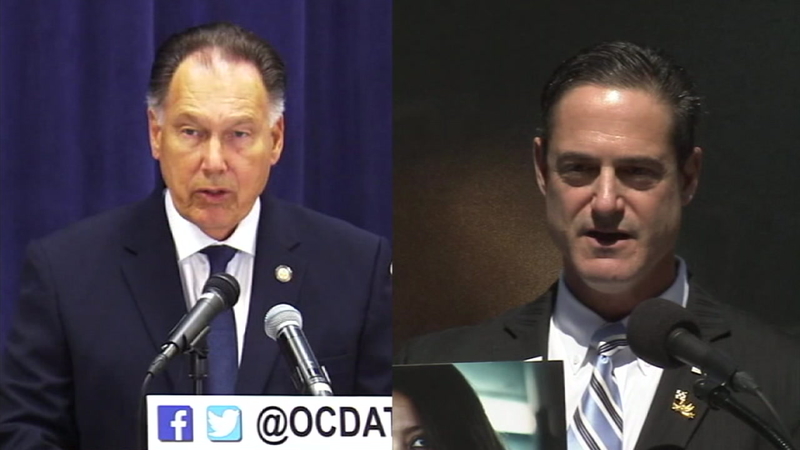 The two candidates are not pulling any punches in interviews leading up to the big day.

Incumbent Tony Rackauckas and currently county Supervisor Todd Spitzer are in a heated battle for the role of OC's top prosecutor.

Says Spitzer: "The district attorney is not only a bad lawyer, he's also a terrible liar."

Rackauckas fires back: "He's a complete self-promoter, he doesn't have any moral compass, just depends on what the right thing to say at the right time."
The race took another turn during an arraignment of the Newport Beach surgeon and his girlfriend accused of drugging and raping several women.

Spitzer accused prosecutors of sitting on the case and provided copies of a detailed warrant executed in January. The warrant was sealed after he obtained it. The judge then ordered journalists to return the copies to the court. Rackauckas says the move could negatively impact the case.

"This person in order to gain some political advantage, is willing to do things that are destructive to this important case," said Rackauckas.

The latest incident highlights the tone this race has often taken.

One thing the men do agree on is the need to curb gangs, by reaching kids early.

"My team will prosecute to the fullest extent of the law, but we're also going to get involved in after-school programs, and we're going to make sure kids are safe at school," said Spitzer.

"We put that program together and in fact, we have half the number of gang members now than we did 20 years ago," said Rackauckas.

Rackauckas has held the position for the last 20 years. He would not say if this would be his last term if re-elected.

His most recent term has been mired in controversy, due to the illegal use of jailhouse informants. A grand jury report found no "systemic cheating" but did say mistakes were made due to poor leadership.

"Felons, murderers are walking out of our jail," said Spitzer. "Because of the fact they cheated on cases."

"That's old news to be honest with you, and you know our office works on a different basis now," said Rackauckas.

Spitzer, a long-time prosecutor before his political career, has dealt with his own controversy. The county settled for $150,000 with a former employee who claimed she was wrongfully fired. She claimed Spitzer had a terrible temper. Rackauckas says Spitzer, who used to work in the DA's office, lacks ethics and maturity.

"He was very difficult to work with, constantly abusing his authority as a district attorney," said Rackauckas.

Both men are asking voters to show up and end this fight at the polls.

"I will put the rudder back on the rudderless ship," said Spitzer. "My prosecutors will follow tow and line, they'll be ethical and honest."