Unions across SoCal react to Supreme Court decision over fees 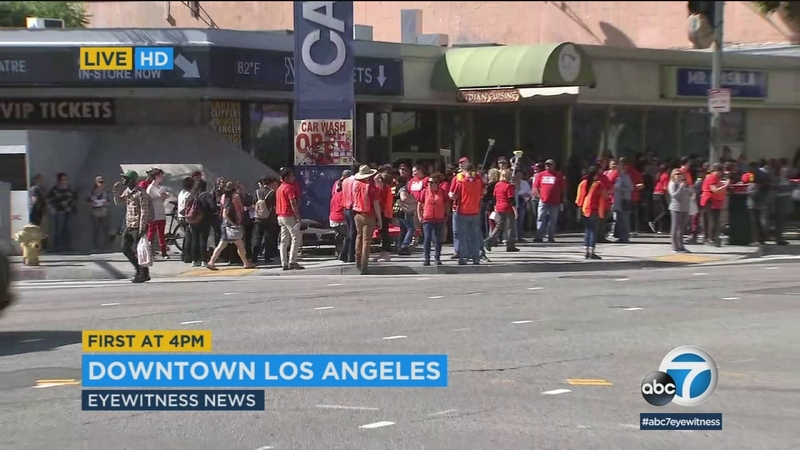 LOS ANGELES (KABC) -- There's been a strong reaction from those who support labor unions in the Southland after the U.S. Supreme Court ruled that government workers cannot be forced to pay union fees.

The decision was made in a 5-4 vote, with conservative justices ruling against labor unions.

It will free non-union members in nearly two dozen states, including California, from paying anything to unions. It could encourage some union members to stop paying dues.

High-profile labor supporters voiced their disappointment. The president of the L.A. County Federation of Labor said the decision will weaken unions.

"Today, Trump's Supreme Court made a decision big employers hope will weaken our unions. The Los Angeles County Federation of Labor has news for them. When workers can choose - without fear or threat - to either stay in their union or leave it, they will choose to earn higher wages, protect their benefits and keep their workplaces safer. Those realities will overpower those who believe working people are worth less. To our adversaries we say be careful what you ask for -- when we fight, we win."

L.A. Mayor Eric Garcetti, a strong organized labor supporter, was critical of the Supreme Court's ruling as well as calling it un-American.

"This is about chipping away at rights , we've seen this in other states with so called right to work , what it means is the right to work without a union . We're seeing an imbalance of what that means. Because it means big money can come in and it's not countered by anything. Rich individuals, Koch brothers and others can come in and buy elections from out of state and that seems to be un-American. It should be the common guy or the common gal should have a big voice like any rich individual."

In the Inland Empire, registered nurses held protests opposing the decision. At Arrowhead Regional Medical Center in Colton about a dozen nurses protested.

Forty years ago, the Supreme Court ruled that workers who are represented by a union negotiating on their behalf for benefits, pay, and other issues, must pay their fair share to the organization even if they're not members and pay dues. But then that decision to force non-union members violates their first amendment rights.

"If we weaken our membership, then we don't have the same voice. Our voice is not as strong," said Rhonda Watts, with the California Nurses Association.

But there are also people in favor of the ruling.