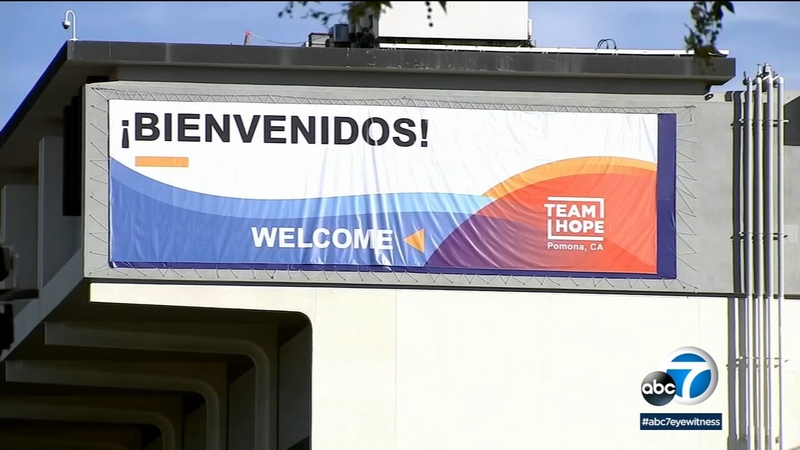 POMONA, Calif. (KABC) -- Some 250 migrant children who arrived unaccompanied at the U.S.-Mexico border were expected to be transported Saturday to a temporary housing facility at the Pomona Fairplex, which will become the latest waystation sheltering children until they can be reunited with family or placed with sponsors, officials said.

Federal and local elected officials, including Reps. Judy Chu and Jimmy Gomez, L.A. County Supervisor Hilda Solis, and Pomona Mayor Tim Sandoval toured the facility on Friday ahead of the opening as an "emergency intake site."

"These children, as you know, have endured abuse, persecution, deep poverty and violence, and they are seeking simply refuge,'' Solis said. "The mission here is to provide whatever support we can once those children come into our arms. And I just can't, again, reiterate how important it is for us to be alongside with these children and help them in our community."

Officials said the first 250 children, mostly teenagers, will arrive Saturday at the site, which is set up to accommodate 2,500.

"We as Americans have a responsibility to ensure we're providing safe and clean accommodations that recognize the dignity and humanity of individuals in our custody, especially when it comes to children,'' Gomez said.

The Fairplex shelter is expected to remain open through the end of this year.

Last week about 100 migrant children were transported to the Long Beach Convention center, which is also serving as a temporary housing location.

The U.S. government picked up nearly 19,000 children traveling alone across the Mexican border in March, authorities said, the largest monthly number ever recorded and a major test for President Joe Biden as he reverses many of his predecessor's hardline immigration tactics.

The Border Patrol encountered 18,663 unaccompanied children in March, well above previous highs of 11,475 in May 2019 and 10,620 in June 2014. The agency started publishing the numbers in 2009. Before then, adults made up the vast majority of those crossing the border.

Customs and Border Patrol must transfer unaccompanied children within 72 hours to the U.S. Department of Health and Human Services, whose facilities are more suited to longer-term care while arrangements are made to release them.