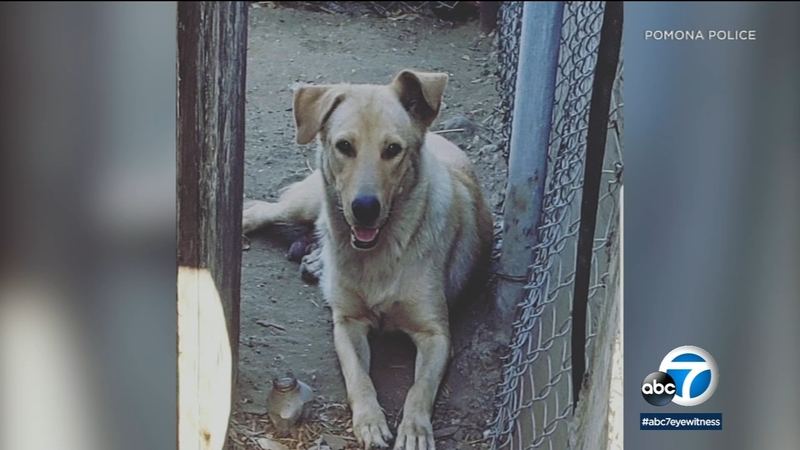 Pomona police search for man who stabbed dog to death

POMONA, Calif. (KABC) -- Pomona police are asking for the public's help in identifying a man who investigators say stabbed and killed a pet dog in its owner's front yard.

The incident, which was captured by a surveillance camera, happened Tuesday outside a home in the 800 block of East Second Street, police said in a statement.

The suspect was recorded trespassing on the property and chasing the animal, "ultimately stabbing the harmless dog to death," the news release said.

The man being sought is described as white or Hispanic, about 30-35 years old, standing 5 feet 10 inches tall and weighing 130 pounds. He has black hair and brown eyes and frequents the block on which the stabbing occurred, according to police.

Police provided a picture of the suspect, hoping to find him before anyone else is hurt. There are several homes, businesses and a college near the area.

The owner's son, who asked not to be identified, said his father is certain the attacker - who they described as a transient - had broken into their business years ago, and was even arrested.

The owner found the dog's body Tuesday morning and watched disturbing surveillance footage of the attack.

"It looked like someone stabbed her, and once we looked at the cameras to see what happened, we found out that a man chased her down, cornered her, stabbed her on the neck," the owner's son said.

A neighbor said she saw the man through her window after waking up to noise.

"I heard him yelling at the dogs, and the dogs kind of got riled up more. For a minute, I kind of heard the dog cry for a little bit," the neighbor said.

The family had their dog, Guera, as a guard dog for about four years.