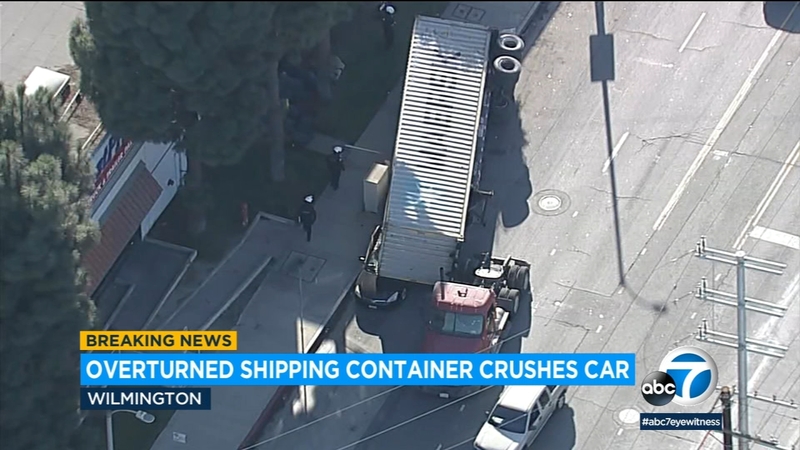 WILMINGTON, LOS ANGELES (KABC) -- A backlog at the ports of Los Angeles and Long Beach is seeping into nearby neighborhoods, where residents have been dealing with increased truck traffic.

And on Tuesday, the problem got an even starker illustration as a shipping container rolled off a truck and crushed a car parked on the street.

The accident happened around 3 p.m. on McFarland Avenue north of Anaheim Street in the heart of Wilmington. Aerial footage from AIR7 HD shows a Maersk shipping container fallen over on top of a car and covering the sidewalk. Fortunately no one was in the car or walking nearby on the sidewalk and no injuries were reported.

Residents in the area say truck traffic has been a problem for many years, but has recently gotten worse as container ships sit across the water waiting to enter the ports.
"Kids can't even play. That's why we put barricades up and put signs. Trucks come down the street and they're not even supposed to. It's not even a through street. They've got to make a left or right," said Wilmington resident John Salas.

He's been on high alert with the increased truck traffic.

"Around the corner, that's been going on for a long time and they're trying to say it's because of the port, but it's not."

However, Salas admits it has become more of a problem recently, which is why he and other neighbors have put up barricades. He's repeatedly contacted the city, surrounding truck companies and the Port of L.A.

The major backlog of container ships at the ports of Los Angeles and Long Beach is the worst its ever been, with 100 ships waiting to enter and unload as of Tuesday.

Sometimes, he says, port police come by to give citations. Other times, port officials have told him it's out of their jurisdiction.

A record 100 container ships sat waiting to enter the ports and unload cargo as of Tuesday. That number breaks last month's record of 97 vessels. In pre-pandemic times, there would typically be about 17 ships at anchor.
There is concern the backlog will worsen with another 45 ships expected to arrive by Thursday.

For Salas, this means more of the same, which adds to the deeper problems he says he and his neighbors have endured long enough.

"This has been going on the last four years. All these truckers have been coming over here and getting all these lots," he said. "Me and my neighbors, we already got two trucking companies kicked out because they're here illegally. They don't even have permits to be here."

Salas has been in contact with L.A. City Councilman Joe Buscaino. Eyewitness News reached out to the councilman, who was not available for comment.

However, his office says this has been an ongoing problem in Wilmington.