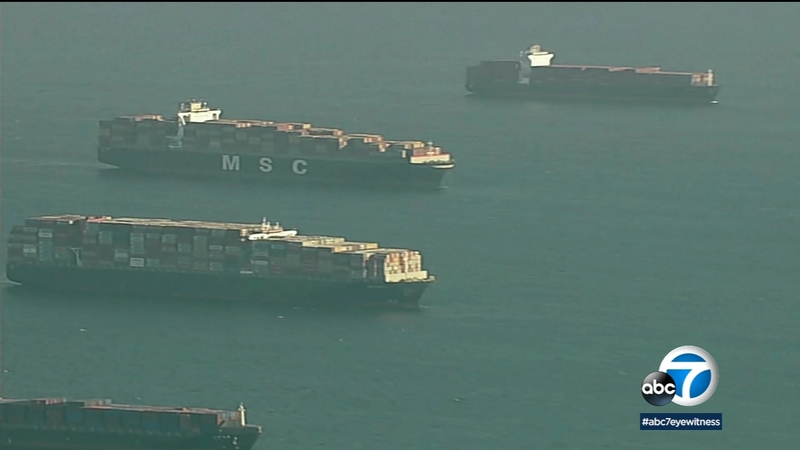 LOS ANGELES (KABC) -- The major backlog of container ships at the ports of Los Angeles and Long Beach is the worst its ever been, with 100 ships waiting to enter and unload as of Tuesday.

That number breaks last month's record of 97 vessels. To put it into context, there would typically be about 17 ships at anchor in pre-pandemic times. The two Southern California ports account for 40% of all shipping containers entering the U.S.

The backlog is only going to get worse with another 45 ships expected to arrive at the ports by Thursday.

One economist said the backlog at American ports is partially due to a change in consumer spending patterns during the pandemic.

The CEO of a toy-making company said the cost of shipping supplies such as cardboard and plastic have recently increased by 300%, and expects some toy prices to double by next year.

Goods stuck on container ships off the coast could be there for a long time despite the Biden administration's intervention to help ease the backlog.

Secretary of Transportation Pete Buttigieg agrees the situation at the ports is a complicated issue and it doesn't just start here in Southern California.

"These issues go through the entire chain, from ship to shelf," he said. "That's why we're not just working with the ports. It's the truckers, the rail companies, the operators and also those retail companies that are at the other end of those supply chains."

The Port of L.A. is shifting to 24/7 operations in an effort to relieve supply chain bottlenecks and move stranded container ships that are driving prices higher for U.S. consumers.

Last week, President Biden announced the Port of L.A. would shift to become a 24-hour, seven-days-a-week operation as part of an effort to relieve supply chain bottlenecks and move stranded container ships that are driving prices higher for U.S. consumers. The Biden administration says the backlog will likely continue into next year.

A trade group representing clothing manufacturers is demanding that more be done, including calling in the National Guard or even using naval ports to help unload that cargo.