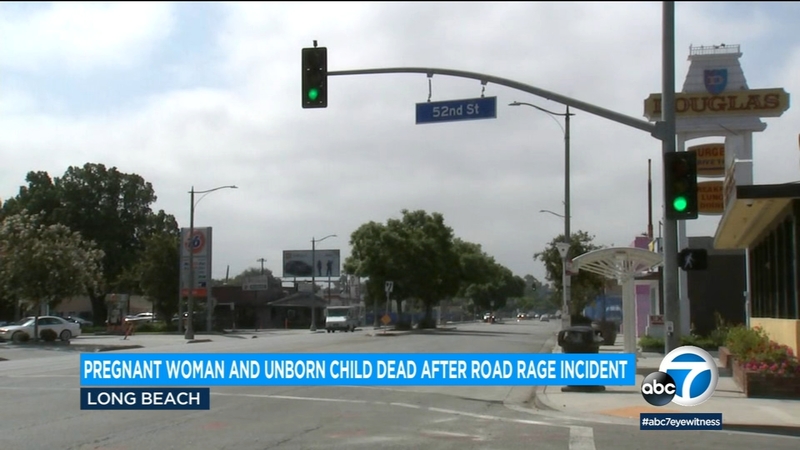 LONG BEACH, Calif. (KABC) -- A pregnant woman and her unborn child were killed and a man suspected of DUI was arrested after a road-rage incident led to a multi-vehicle crash Saturday morning in Long Beach, authorities said.

Shortly after 11:30 a.m., officers responded to the crash site at the intersection of Long Beach Boulevard and 52nd Street, the Long Beach Police Department said in a statement.

Three vehicles were involved in the collision, including a 2006 GMC pickup truck with three injured occupants: a man, a critically hurt woman and a 10-year-old boy. The injuries sustained by the man and boy were not life-threatening, investigators said.

Long Beach Fire Department paramedics transported the three patients to a hospital, where medical staff determined the woman was about eight months pregnant. She and her unborn child were pronounced dead at the facility, police said.

The woman was identified only as a 23-year-old Long Beach resident, pending notification of her family by the Los Angeles County coroner's office.

Police believe road rage triggered a shootout outside the La Habra Police Department that left a suspect dead and an officer hospitalized.

A preliminary investigation indicated the man was driving his pickup truck at a high rate of speed, southbound on Long Beach Boulevard, with the pregnant woman and boy as passengers, authorities said.

The driver "was involved in a road rage incident with a second vehicle for several blocks as the driver of the second vehicle attempted to disengage" from the confrontation, the news release said.

A 45-year-old man, who was not involved in the road rage incident, was behind the wheel of a 2004 Toyota Corolla and was parked along the west curb south of Mountain View Street, according to police. As he pulled away from the curb, the Corolla and GMC collided.

The driver of the GMC lost control of his truck and hit an unoccupied pickup truck that was parked just north of 52nd Street, authorities said. He was later identified as 26-year-old Miguel Larios of Long Beach.

Larios was arrested and booked on two counts of gross vehicular manslaughter while intoxicated, one count of driving under the influence, and one count of child endangerment, the statement said.