Businesses are still grappling with a shortage of truck drivers and some critical components, like computer chips.
KABC
By Josh Haskell 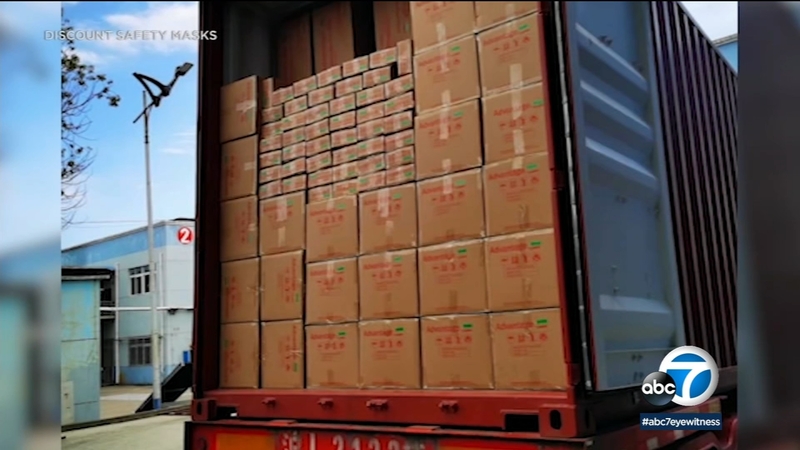 LOS ANGELES (KABC) -- President Joe Biden on Wednesday touted progress his administration has made in alleviating supply chain issues that have spurred shortages of consumer products, raised prices for Americans and contributed significantly to historic levels of inflation in the United States.

"We brought together business and labor leaders to solve problems and the much-predicted crisis didn't occur. Packages are moving, gifts are being delivered and shelves are not empty," Biden said at the White House.

Biden on Wednesday received a progress report from members of his Cabinet and private sector CEOs on efforts to tackle supply chain issues, lower consumer prices and keep shelves stocked amid the holiday season.

The meeting comes as the omicron variant threatens to put renewed pressure on global supply chains that were thrown into chaos amid the pandemic -- something the administration says it is watching closely.

Biden pointed to evidence that bottlenecks are beginning to unclog and said retail inventories are up 3% from last year and that delivery times for FedEx, UPS and the US Postal Service "are faster than before the pandemic, even as Americans have purchased a record amount of goods."

According to data provided by the ports of Los Angeles and Long Beach, the number of import containers sitting at either port for nine days or longer is down by about 46% compared to two months ago.

There's also a potato shortage in North America which has impacted McDonald's restaurants in Japan.

Between Dec. 24-30, only the small size serving of McDonald's french fries will be available in Japan.

Randy Wells of Discount Safety Masks told Eyewitness News he had a container stuck at the port of L.A. for 4 weeks, which hurt his sales, and said he may run out of inventory again on Thursday.

"The Biden administration, I believe their efforts have improved the situation, but we still have a long way to go to make it as efficient as it should be," said Wells.

Biden also noted gas prices are coming down after they skyrocketed earlier this year.

"Gas prices are coming down more than 10 cents a gallon nationally. Gas prices in 21 states now are at their historic averages before the pandemic. Historic average. That's good news for Americans hitting the road this week," Biden said.

Despite the progress, businesses are still grappling with a shortage of truck drivers and some critical components, including computer chips, remain scarce.

The President pointed to the $230 million his administration is announcing in Port Infrastructure Development Grants, which the White House says is the only federal grant program dedicated to port infrastructure. The administration also recently announced its Trucking Action Plan to recruit and retain more truck drivers by improving the quality of the job.

"We've got a way to go but we're making progress. Still top of mind for me is what is top of mind for so many families -- the pinch of prices and the cost. Look, addressing these costs has been and will continue to be my top priority the entire administration," Biden said.

The President said his massive economic and climate spending bill, which is stalled on Capitol Hill because of disagreements with Democratic Sen. Joe Manchin of West Virginia, is the "biggest weapon in our arsenal" to reduce costs for American families.

Last month, Biden held a meeting with the CEOs of a number of major retailers and grocers to discuss the holiday shopping season. Following that meeting, the President assured Americans that shelves would be stocked and that the US was "heading into the holiday season in very strong shape."

In October, Biden directed his administration to work with companies and ports on a "90-day sprint" to alleviate bottlenecks. The Port of Los Angeles was moved to 24/7 service, which brought it into line with operations at the Port of Long Beach, which is already working on a 24/7 schedule. Those two ports handle 40% of container traffic in the US.

The administration also worked with the Ports of L.A. and Long Beach last month to impose a fee on ocean carriers if their cargo sits on docks for more than eight days.

The White House says since then, the number of containers sitting on the docks for more than eight days has fallen by nearly 50%.

The White House also says the price of shipping a container between Asia and the West Coast has fallen by more than 25% since its peak in September.

In order to combat high energy prices, Biden directed the Department of Energy to release 50 million barrels of oil from the Strategic Petroleum Reserve -- the largest release from the reserve in US history, Biden said.

This release was announced to be in coordination with several other countries, including China, India, Japan, the Republic of Korea and the United Kingdom.
Officials believe the coordinated effort could potentially have more of an effect on lowering gas prices.

Wednesday's meeting comes the day after the President sought to reassure vaccinated Americans that they can still proceed with their holiday plans without fear of becoming seriously ill and announced a number of new efforts to combat a surge of COVID-19 cases in the United States.

Biden announced the purchase of a half-billion at-home rapid COVID-19 tests. The administration will launch a website where Americans can go to get the rapid tests delivered to their homes for free starting in January.

The omicron variant and rising COVID-19 cases has caused a surge in demand for at-home tests in some hotspots -- so much so that the two largest pharmaceutical chain stores in the US, CVS Health and Walgreens, are limiting the number of at-home COVID kits customers can buy.