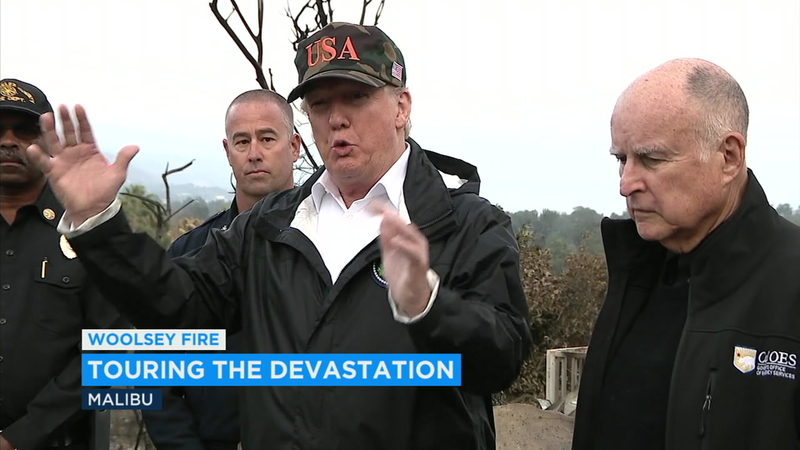 Trump landed at Naval Air Station Point Mugu and then went to Malibu to see the devastation caused by the fire.

He visited a bluff overlooking the Pacific Ocean where houses once stood and now has mostly charred wreckage.

"It's devastating to see it," Trump said.

"I have to say the government officials have done an incredible job. When you look at this devastation. I guess at this moment in this area there are three deaths. It's horrible but it's also pretty incredible - the job they've done. They evacuated very early and they took a lot of heat and they made the right decisions."

Trump toured with Gov. Jerry Brown and Gov.-elect Gavin Newsom and met with firefighters in Malibu.

Newsom praised Trump for making an emergency declaration to help the state with recovery efforts.

"We are very grateful for that," the lieutenant governor said. "There are no politics being played here. The federal government won't just be here today, but over the next few years as we rebuild."

"People have had enough of this and we have to deal with this head on," Newsom said.

After the Malibu visit, Trump returned to Point Mugu. At the naval station he met with families of victims of the Borderline Bar & Grill shooting in Thousand Oaks, which left 12 people dead.

"We hugged them and kissed them and it was very warm," Trump told reporters afterward.

He called the shooting a "tragic event."

"When you look at the death it's just tragic."

Earlier in the morning, he toured Northern California to view the devastation caused by the deadly Camp Fire.