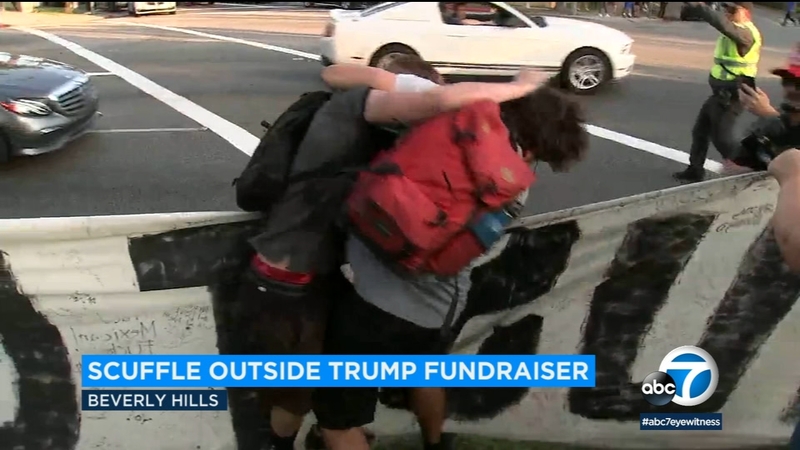 BEVERLY HILLS, Calif. (KABC) -- Protesters and supporters of President Donald Trump clashed as the president visited Southern California for a series of fundraising events for his re-election campaign.

A small group of protesters had gathered Tuesday evening outside the Beverly Hills Hotel, not far from where Trump was to attend a fundraiser at the home of a wealthy real-estate developer.

At one point it appeared some of the protesters were trying to light an American flag on fire and then a scuffle broke out in the crowd. Two men were seen violently struggling with each other in the crowd. Police officers quickly jumped in to wrestle the two men to the ground and separate them.

Officials said later the two men were detained but not arrested.

Others in the crowd say they were involved in additional clashes. One Trump supporter said he was attacked by a protester.

"I didn't know what was going on," said Trump supporter Harim Uzziel, who was wearing a red hat that said "Keep America Great."

"I saw a scuffle in between. One of them came to the sidewalk and he started punching me and attacking me. I had a camera in each hand so I wasn't able to defend myself."

Trump is in California for a series of fundraising appearances in Los Angeles, San Diego and the Bay Area that are expected to raise some $15 million. The Beverly Hills event was charging from $1,000 a person to up to $100,000 to attend a roundtable with the president.

Trump supporter Gregg Donovan said he bought a $1,000 ticket for the event, but was later told it was overbooked and his money would be refunded. He showed up outside near the event to demonstrate his support for the president.

Matthew Owen was among protesters near the fundraiser.