A look at presidential limos through history 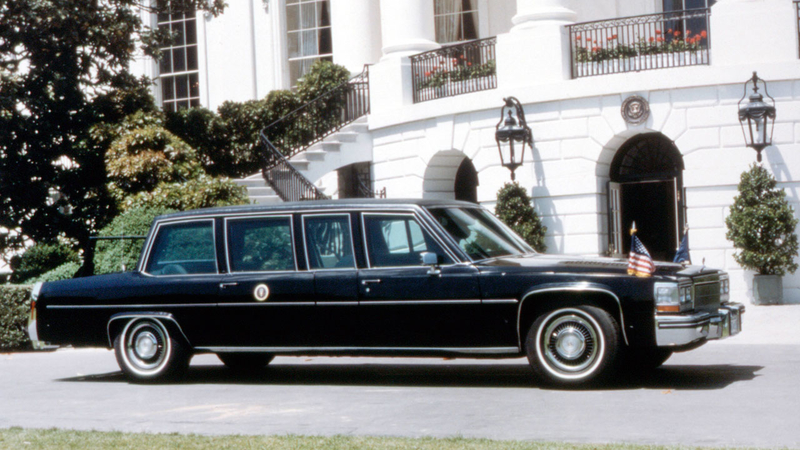 A look at presidential limos through history

LOS ANGELES (KABC) -- Everyone wants a safe car. Now that Donald Trump is president, he rides in probably the safest car in the world.

"It's a tank on wheels," said Ron Williams of the Talon Companies in Costa Mesa, referring to the black Cadillac Trump was seen riding in during his inauguration activities on Friday.

Williams should know, as he spent 23 years with the U.S. Secret Service before retiring.

Working as a consultant to the agency afterward, he is one of the few people who has gotten up close to the massive presidential limousine nicknamed "The Beast." Williams said the word car doesn't really do it justice.

"For a better term, I would call it a safe house on wheels. It has eight inch thick armament, it weighs 8,000 pounds, and it's 18 feet long," added Williams. The retired agent was careful to not reveal too many of the details that remain classified.

It's now in the possession of the Richard Nixon Presidential Library and Museum in Yorba Linda, and is currently on loan to the Petersen Automotive Museum in Los Angeles.

During Reagan's first term, General Motors built a batch of new Cadillac limousines to Secret Service specifications, an example of which is housed in the Air Force One Pavilion at the Ronald Reagan Presidential Library in Simi Valley.

GM then built the next model of armored Cadillac when President Bill Clinton was in office. One sits in the lobby of the Clinton Presidential Library and Museum in Little Rock, Arkansas.

The presidential limo that served President Bill Clinton. The retired limousine is housed in the lobby at the Clinton Presidential Library and Museum in Little Rock, Arkansas.

In the years since 9-11, the strategies have changed in regard to protecting the president from harm. The current armored car made its debut at President Barack Obama's first inauguration in 2009.

Taller and obviously stouter than previous presidential rides, it made no secret of the fact that extra measures were taken to make it even more bulletproof, bomb-proof, and even poison gas-proof.

GM is currently working on a next-generation limousine that President Trump will start riding in later in 2017. It'll look similar to the current car, but have even more beefed-up protective qualities.

So when the current Cadillac limousine eventually gets retired, will it end up on display at the planned Barack Obama Presidential Center near Chicago?

Unfortunately for car enthusiasts who love to see these vehicles in person, no. The Secret Service no longer releases former presidential vehicles into the hands of libraries or museums. There's just too much about the cars that are classified.