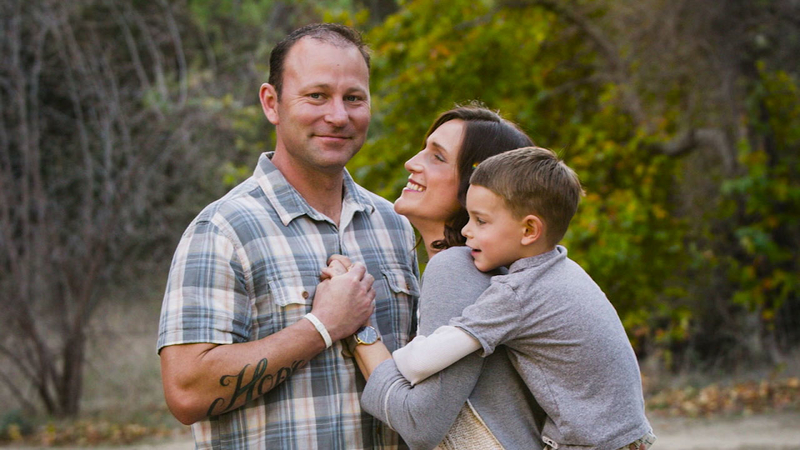 LOS ANGELES (KABC) -- What's a day worth? There are so many in a lifetime, we seldom notice each precious one passing to the next. But not Adam and Brinden Wohlstattar.

"Our first date, we were at this sushi restaurant in Los Angeles, and I think we both felt we just got each other a lot," Brinden Wohlstattar said.

I first met the Wohlstattars in March. That perfect first date led to marriage and Grayson, who is now 4 years old.

It was all so easy until family members one day noticed that it took Adam a really long time to put on his sweatshirt.

"Everyone could see the difference, but I didn't really understand it," Adam Wohlstattar said.

Test reveals Prion disease
A test at the University of California San Francisco Memory and Aging Center revealed that he had Prion disease.

It's extremely rare, related to ALS, Alzheimers and Mad Cow. Prion cripples the brain, and there's no cure.

"It's very difficult to deal with somebody who is suffering from Prion disease. You watch your loved one slowly decline in front of you," said Dr. Michael Geschwind. "Historically, everyone who has gotten the disease has passed away from it."

Even more shocking, the clinic pulled out an old file, and the name on it was Wohlstattar.

Shocking discovery that father and brothers died from Prion
It was Adam's father's case and two half-brothers. All three died from Prion, and Adam Wohlstattar never knew it.

Adam's mother recalls when her husband Larry suddenly started acting strangely. It was the 70s when doctors had no idea Prion existed.

"Larry was referred to a psychiatrist who indicated that his problems were related to unresolved childhood conflicts," she said.

The couple divorced, and Adam Wohlstattar never knew his father.

If his heart stops, do you resuscitate? If he no longer can swallow, do you insert a feeding tube, or do you allow him to succumb naturally? These are heavy questions that have to be answered.

Late October, I checked in on them at their home in Northridge. Adam Wohlstattar looks the same, but he's not.

"It's been a little bit worse with the disease," he said as he stumbled over his words. "With the talking, it's very uncomfortable."

Brinden Wohlstattar is also struggling with her new reality.

"I'm kind of stuck in this awful place of wanting to push him to say, 'I can,' and understanding that he can't," she said, fighting back tears. "It's just a hard place to be."

As for those "end of life" questions, they still haven't talked about it.

"Just that we won't be able to make it through the conversation, that we'll just start crying," Brinden Wohlstattar said. "I can't even finish my thought here without crying, and I'm talking to you."

While the rest of us fly through life with little notice of the passage of time, no one is more clear than Brinden and Adam on what each and every day is worth.

"I just feel like, I don't think either of us wants to let each other go," Brinden Wohlstattar said.

Fundraiser for Prion research and to help family
Adam was the vice principal at Valley View Middle School. The disease prevents him from working, but his students are still an important part of his life. They even held a fundraiser to help him deal with expenses and to donate to research.

There is still a chance Adam's son carries the disease.