Project Fatherhood teaches men raised without dads to be fathers 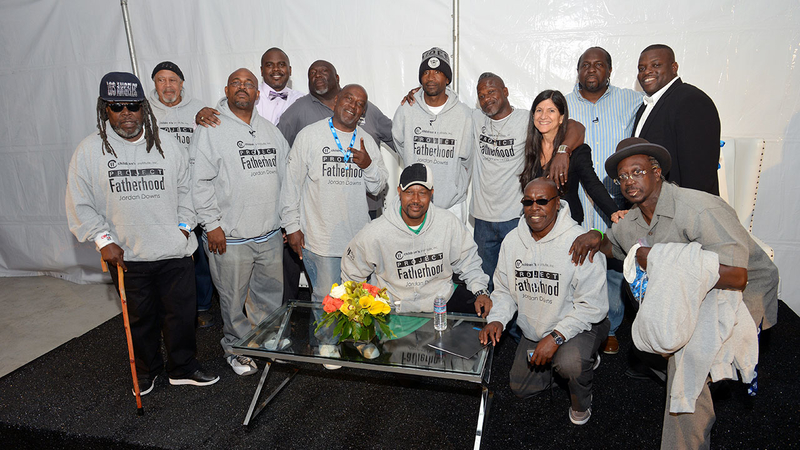 Project Fatherhood teaches men raised without dads to be fathers

WATTS, LOS ANGELES (KABC) -- Project Fatherhood teaches men, most of whom have been incarcerated and raised without dads, how to be good fathers.

"It's important to talk about fatherhood, because I grew up without a father," said "Big" Mike Cummings, the group's co-founder.

Cummings' partner in organizing the group, Dr. Jorja Leap, described it this way: "This group exists to have these men father one another, so they can be fathers to their children."

Mike Cummings grew up in Watts near the Jordan Downs Housing Project. His father was mostly absent.

"When I first wanted to talk to a girlfriend and go on my first date, I had to ask my mom, 'How should I act? What should I do?'" he said.

By seventh grade, he was part of a gang.

"We had to gather up and be a group of guys being together because that's the blood side of the community," he said.

Cummings began selling cocaine and then started using his own product. That drug use started a downward spiral that included robbing and stealing to feed his addiction.

Mike wound up behind bars. His friends from the gang were nowhere to be found.

"When I went to jail and called for help, no one came to help me but my mom. My mom didn't send me no money because she didn't have money, but she sent me bible scriptures," Cummings said.

Cummings realized he was an absent father, just like his dad had been.

When Big Mike got out of prison, he became Pastor Mike.

Project Fatherhood started informally with Big Mike gathering his friends for barbecues. They would meet up around the Jordan Downs Housing Project to help each other with issues in their lives.

Then, they received a grant offer from the Children's Institute. They could receive $50,000 if they agreed to work with a licensed social worker.

"What I've discovered in Watts is it's not about the color of your skin, it's about your devotion to the community," Leap said.

"I became a sort of combination mother, sister, auntie, family member and the group became very important to me," she added.

They started holding weekly, free gatherings at the Jordan Downs Housing Project. Each week, the men would eat together and talk.

"People said it wasn't going to work. But we started out and ended up with standing room only," said Big Mike.

At first, they offered men a $25 gift certificate if they attended four meetings. The money, they hoped, would be spent on meals with their kids.

Almost everyone who showed up had grown up without a dad and had done time in prison.

"A lot of these guys don't even know how to be fathers. How can you blame somebody? If you know better you can do better," said co-founder Andre Christian.

"I've had females come and say, 'Keep him up in Project Fatherhood, you know its working'!" said Christian.

The program is becoming a sort of model.

Big Mike has met with Los Angeles city leaders, lawmakers in Sacramento, Congressional representatives and sports leaders to talk about his message.

"People needed to hear this real narrative of men of color who are fathers who are changing their lives, raising their children and healing this community," Leap said.

She said these are the men who can transform Watts.

"The leadership, the real sources of change do not come from the outside, they are not experts. The leaders are here and come from this community," she added.

Leap hopes that more job opportunities move into the community.

Leap is donating 100 percent of the book's proceeds back to the group.