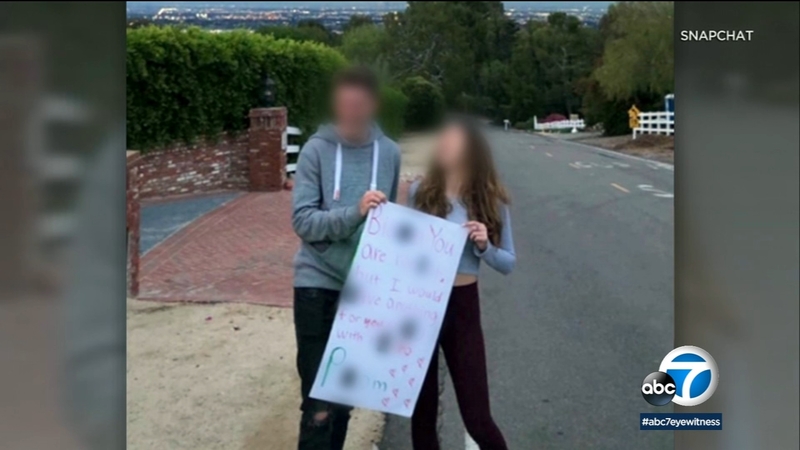 PALOS VERDES, Calif. (KABC) -- A "promposal" sign appearing to have a racist message has some in the Palos Verdes community outraged.

A photo circulating on social media shows two teens who attend Palos Verdes High School standing together and laughing while holding the sign.

The N-word appears to be highlighted in bold letters on the sign, which reads: "BiaNca You are racIst but I would Give anything for you to Go with mE to PRom."

Eyewitness News blurred the students' faces because they are minors.

A woman who tweeted that her daughter is a student at Palos Verdes asked people to call the school and "condemn this horrific sensibility #racism #ignorance."

One student said racism isn't exclusive to the school situated in the affluent Palos Verdes community.

"I think there's racism everywhere, you can't just isolate it to Palos Verdes High School," student Ryan Pascal said. "It's horrible that it's coming to light in such an offensive way, but these are conversations that need to be had."

"At this time, I am asking all teachers and parents in our school community to join me in reminding our students that we live in a society that must respect diversity and tolerance."

Eyewitness News has learned that the sign was made by another student, and the school has taken disciplinary action against all students involved.

Students told Eyewitness News that although the students involved have apologized, saying they didn't know the sign would be hurtful, other students said they knew exactly what they were doing.

In a statement on the school's website, Tyner said he was meeting with all students, class by class, on Wednesday to "review appropriate behavior and how the use of hurtful racial slurs like the one used on this recent picture posted on social media is unacceptable."

One teacher said she would also address the issues surrounding the controversial photo with her students.

"This day, I have ninth- and tenth-graders so they will be writing a prompt about the damage that this can cause. Not only to a school, but to other students that are seeing this negativity," teacher Rebecca Jessop said.

The school's prom is scheduled for Saturday.

Palos Verdes police said there would be an "increased presence" at the school Wednesday due to the photo.