County officials didn't know that thousands of PPE boxes were moved outside and forgotten for months, until the I-Team told them
KGO
By Dan Noyes 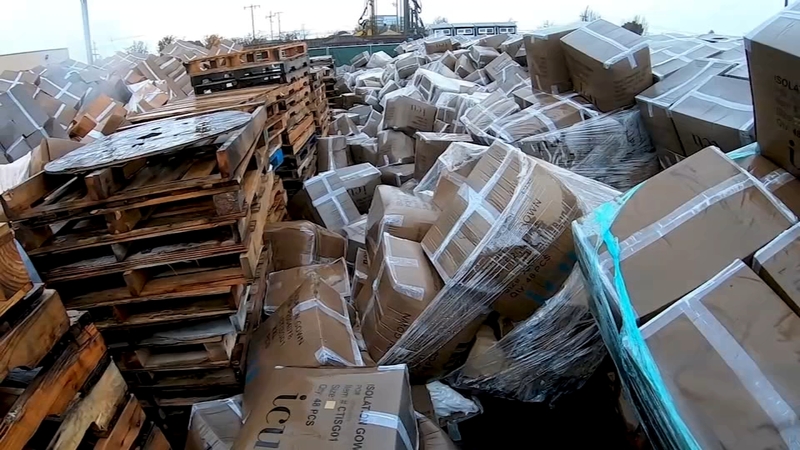 More than $10M of PPE left in the rain in San Mateo Co.

SAN MATEO, Calif. -- Workers in California's San Mateo County are scrambling to clean up a mess uncovered by our sister station in San Francisco, KGO-TV's I-Team. More than $10 million worth of precious personal protective equipment-- purchased with your tax dollars - was left outside in the rain.

We all know how important masks, hospital gowns, and other protective gear are, as the COVID pandemic surges yet again.

This seems hard to believe, but top county officials didn't know that thousands of boxes of PPE were moved outside and forgotten for months until the I-Team told them.

KGO-TV's Dan Noyes got a tip on a recent rainy day and went straight to the San Mateo County Event Center, Gate 9, and couldn't quite believe what he found. Thousands upon thousands of boxes containing all sorts of brand new personal protective equipment soaking in the rain; stacks of boxes collapsing, too many to count, some breaking open and spilling their contents.

Medical staff at Santa Clara Valley Medical Center made an urgent plea Wednesday morning for personal protective equipment (PPE) and funds as they prepare to weather the third wave of COVID-19 cases and hospitalizations.

He also spotted pallets of face shields, vented goggles and various types of coveralls: "Boxes upon boxes of PPE just rotting in the rain. How did this happen?"

Our road to some answers and accountability started with a security guard. Remember, the county owns this property.

SECURITY GUARD: "Can I help you?"

SECURITY GUARD: "Did somebody invite you to come on the property?"

DAN NOYES: "I'm a taxpayer, I don't need an invitation."

SECURITY GUARD: "If we don't have an event then you are not supposed to be on the property."

DAN NOYES: "I understand. I'll be done in a few minutes."

SECURITY GUARD: "Okay, I will let my boss know."

At least eight companies partially owned by Gov. Gavin Newsom collectively received millions of dollars from the Paycheck Protection Program, according to an ABC7 analysis.

His boss? Dana Stoehr, CEO of the nonprofit that runs the event center for the county.

DAN NOYES: "Why is all the stuff going to waste here?"

DANA STOEHR: "So, can you stop filming?"

DAN NOYES: "No, I work at Channel Seven, I need to ask questions."

DANA STOEHR: "I understand, but it's not going to waste. It's damaged. It was damaged."

DAN NOYES: "It was damaged or it's being damaged now?"

DANA STOEHR: "No, it was damaged in a previous storm."

Stoehr would not provide more details. We later learned the event center moved all that PPE outside in September because it needed the space, and those big storms last October first damaged the PPE.

DANA STOEHR: "It's not my property. I can't discuss it with you."

DAN NOYES: "But as the CEO of the event center, isn't it your job to protect the stuff that's been stored here?"

DANA STOEHR: "It's, it was fully taken care of exactly the way it should have been."

How costly was that mistake? Noyes sifted through the boxes for some answers.

These goggles with vents run $3.99 apiece, $478 worth in this box among many laying in the rain.

A Bay Area-based cyber security company is warning against purchasing fake COVID-19 PCR test results from people out to get your personal information.

DAN NOYES: "Can you give me an idea of the amount of money we're talking?"

MIKE CALLAGY: "I don't know. There's a lot of PPE out there."

DAN NOYES: "Is it safe to say over a million?"

MIKE CALLAGY: "I would say, oh yeah, I would say over, over a million."

DAN NOYES: "Is it multiple millions or-"

Callagy told us he didn't know about all that PPE that's been deteriorating outside for months until I called. He immediately ordered county workers to bring the supplies back inside, to run an inventory and see how much of it is salvageable. As they worked, KGO-TV's helicopter SKY7 gave the clearest view yet of how many pallets of PPE crumbled from the rains since last fall.

DAN NOYES: "But I really am trying to find out who was responsible. Was this a mistake by the event center or was it a mistake by your team?"

MIKE CALLAGY: "It clearly is a mistake by the county and ultimately, I'm responsible for the county. So, you know, I take full responsibility for it. ... We are taking precautions to make sure that doesn't happen again."

A source tells the KGO-TV a convoy of garbage trucks filled up with brand new PPE and took it to the dump, in the past two months -- a massive waste of your tax dollars that the county promises won't happen again.

If you have a tip for the ABC7 I-Team, you can visit this page.