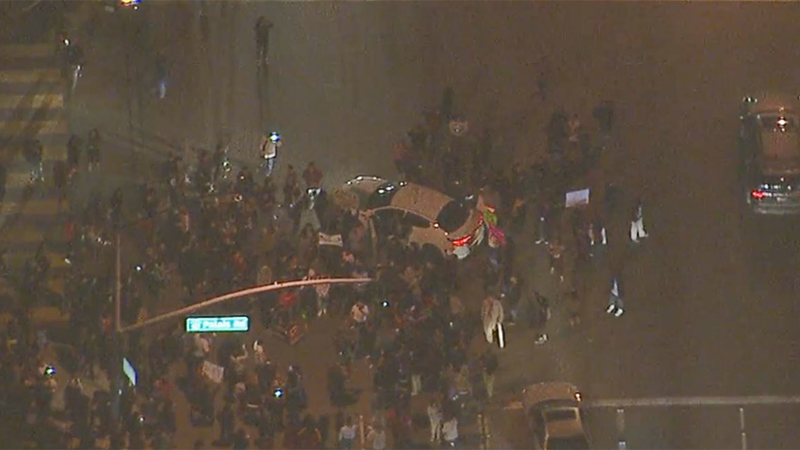 ANAHEIM, Calif. (KABC) -- Hundreds of people protested in Anaheim, clogging streets and surrounding cars in a demonstration against an off-duty officer's confrontation with a teen the day before.

The protesters gathered in the neighborhood where the off-duty Los Angeles officer had been recorded on video in the confrontation.

The incident in the area of Euclid Street and Palais Road stemmed from ongoing issues with youths walking across the officer's property. A confrontation ensued and the officer apparently tried to detain a 13-year-old, holding on to him and refusing to let go as the teen struggled to break free.
There was pushing, shouting and struggling in the confrontation and at one point the officer pulled his weapon from his pants and discharged it once, but did not hit anyone. Though there were no serious injuries, the video quickly went viral, as outrage grew over the officer's treatment of the youth.

The officer said the teen had threatened to shoot him, but in an interview his mother later said he was threatening to "sue" for how he was being treated.
As outrage spread Wednesday, someone spray-painted anti-police graffiti on one of the homes in the neighborhood, but it was not clear if it was in fact the officer's house.

The protesters moved from the neighborhood to other areas of Anaheim, blocking major streets such as the intersection of Ball Road and Euclid Street.

At one point, during the protest the crowd is seen chasing after an outnumbered police patrol car.

Police reinforcements later arrived as the Anaheim Police Department declared a tactical alert in the area of Euclid and Palais, and warned the public in a tweet: "Avoid area. Do NOT engage in acts of violence or vandalism."

Tactical Alert called for large protest in area of Euclid and Palais. Avoid area. Do NOT engage in acts of violence or vandalism #anaheim

APD is prepared to make arrests. Acts of violence and destruction of property will NOT be tolerated #anaheim #protest #tacticalalert #APD

The protest location was about two blocks from Disneyland.

Anaheim Mayor Tom Tait said Wednesday the city is committed to a "thorough, impartial investigation" of the incident.

"Like many in the community, I've seen the video and I'm very concerned about what it shows," Tait said. "Anaheim is committed to a full and impartial investigation. Our city will move forward without delay."