Hundreds of protesters march in support of Palestine, shut down traffic in Westwood 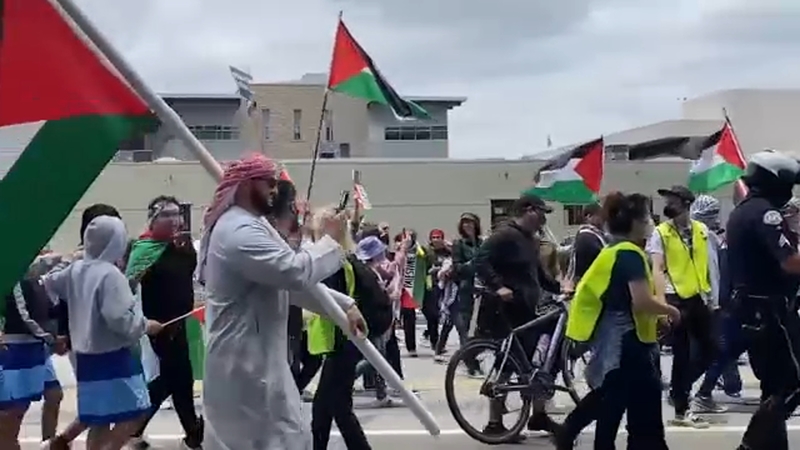 Hundreds of protesters march in support of Palestine in Westwood

LOS ANGELES (KABC) -- Hundreds of protesters shut down traffic as they took to the streets of Westwood in a rally Saturday calling for an end to Israeli airstrikes over the Gaza Strip.

The protesters waved flags and signs that said "free Palestine" and shouted "long live intifada," or uprising. They marched from outside the federal building to the Israeli Consulate about one mile away.

Members of the Palestinian Youth Movement were among those who staged the rally and march.

Police shut down traffic on Wilshire Boulevard and urged motorists to avoid the area. Police from multiple agencies were monitoring the ongoing demonstration.

The area of Wilshire Blvd near the 405 fwy is very congested due to large protest activity currently underway. Avoid the area if possible for the next few hours due to multiple street closures. pic.twitter.com/uFPHmd8kc5

Rockets streamed out of Gaza and Israel pounded the territory with airstrikes.

An Israeli airstrike on Saturday targeted and destroyed a high-rise building in Gaza City that housed offices of The Associated Press and other media outlets. Hours later, Israel bombed the home of a top leader of Gaza's ruling militant Hamas group.

The Israeli military said the home of Khalil al-Hayeh served as part of what it said was the militant group's "terrorist infrastructure." Al-Hayeh is a senior figure in the Hamas political leadership in Gaza, and the attack marked a further escalation, signaling that Israel is going after Hamas' top leadership, and not just military commanders. His fate after the strike was not immediately known.