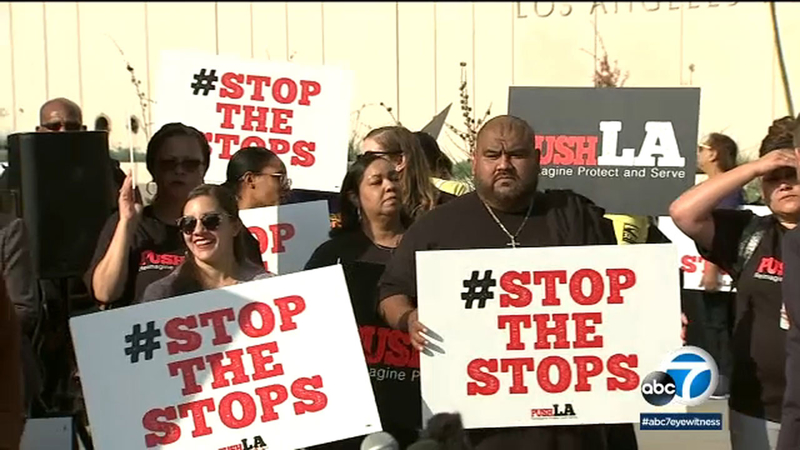 LOS ANGELES (KABC) -- A coalition of 15 social justice organizations is lashing out at LAPD and demanding reforms from Police Chief Michel Moore and Mayor Eric Garcetti.

The activists say that a Los Angeles Times analysis of traffic stops proves that communities of color are unfairly targeted.

"They make you put ALL your windows down and have guns ready, drawn, with my kids sitting in the back seat. Now you tell me what am I supposed to do with that trauma," asks April Verrett, president of SEIU Local 2015.

The Times reviewed data from traffic stops of 385,000 drivers and passengers over a 10-month period. It found that three-quarters of those stopped citywide were black or Latino.

According to the report, blacks were searched more than any other group yet contraband was found more often with white people.

LAPD has used its mobile metro division to respond quickly to areas where there is a sudden rise in crime.

Today LAPD says it does not want the community to feel under siege.

"Most recently we have taken steps to more actively manage the actual number of personnel in some of these neighborhoods to avoid the perception of a constant over-deployment," says a statement released by LAPD media relations.