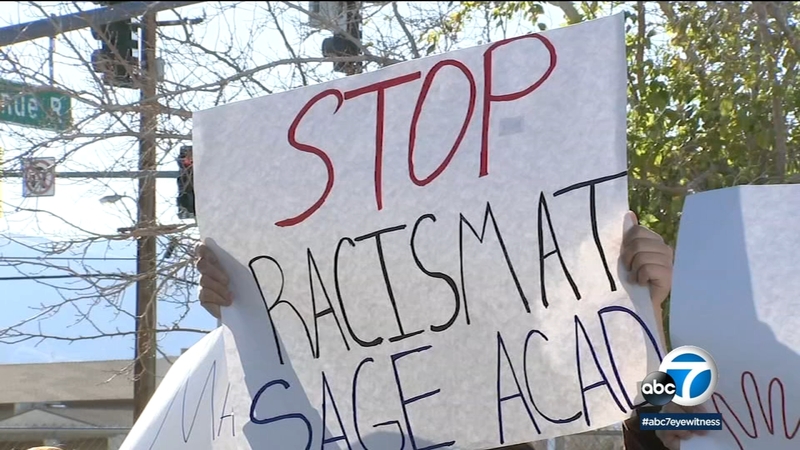 PALMDALE, Calif. (KABC) -- A Palmdale middle school teacher has been placed on administrative leave for a second time after "credible" allegations that the educator used racial slurs in class, the school district confirms.

Students from Sage Academy Magnet School first reported the teacher's comments in late October. After her first administrative leave and unspecified disciplinary actions, she was allowed to return to the classroom, which sparked a new uproar.

Students came forward to school officials with other statements not previously reported.

"She says we don't belong in this country. She would say that we would use the government for welfare and food stamps, we would take White people's jobs," student Yaretzy Martinez said.

"Regardless of whether it was a joke or not, comments are comments, and racial comments are unacceptable in any way shape or form," said Palmdale Assistant Superintendent of Human Resources Ryan Beardsley.

Parents and activists are demanding permanent removal and special counseling for the students with a private agency that is not tied to the school district.

"The kids were severely traumatized and extremely angry to the point they were literally crying," said Agents of Change activist Dr. Miguel Coronado.

Students say they were hurt by the teacher's anti-immigration statements.

"She would always talk about Donald Trump. She would make comments about how it was right for him to build a wall and to block all the immigrants out of this country," Jossylin Villegas said.

Students rallied Thursday, calling for the teacher to be terminated from all classrooms.

"What she did to us in our school, she could go do to some other kids," Martinez said.