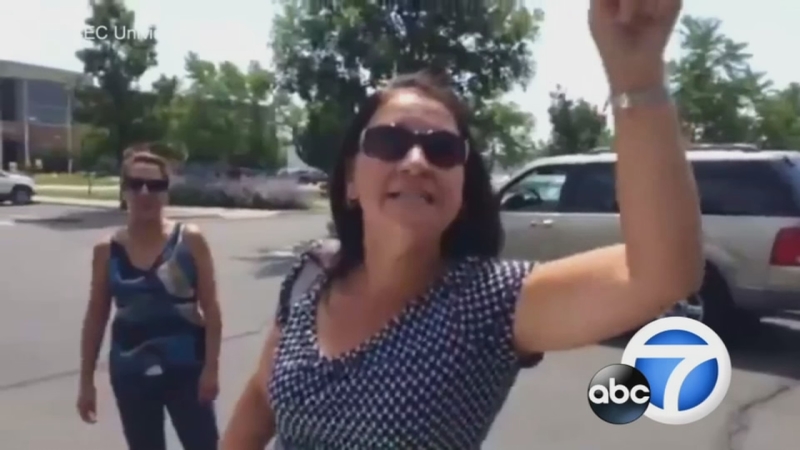 GRAND JUNCTION, Colo. (KABC) -- A woman's racist verbal attack on a Mexican woman was all caught on camera and has sparked outrage on social media.

"You, your kind. You're the one that give brown people a bad name. Just want to (expletive) get something for nothing. Then get your (expletive) a job if you don't have one," the woman was heard saying in the video.

Yolanda Flores told Univision affiliate KCEC that she left her dog inside her vehicle with the windows partially open while she picked up a document from a nearby clinic in Grand Junction, Colorado.

"Since I wouldn't answer their questions that made them extremely angry and that's when the attacks began," Flores told KCEC. "A man came up to me and asked what was going on. I told him I had done a big mistake by leaving my dog in the car, even though it was for a few seconds."

When Flores tried to communicate to the man in Spanish, it made the racist onslaught more severe.

"Speak English (expletive)," the woman said snapping her fingers in Flores' face. "This is America."

"Down with Mexicans that don't learn the language of the world," the woman shouted as another woman appeared to support her.

Flores' child could be seen sobbing as he begged his mother to stop the confrontation.

According to Flores, the woman accused of her of trying to receive money from the government since she was outside a government building that helps people with disabilities. But Flores said she was just there to pick up a document she needed.