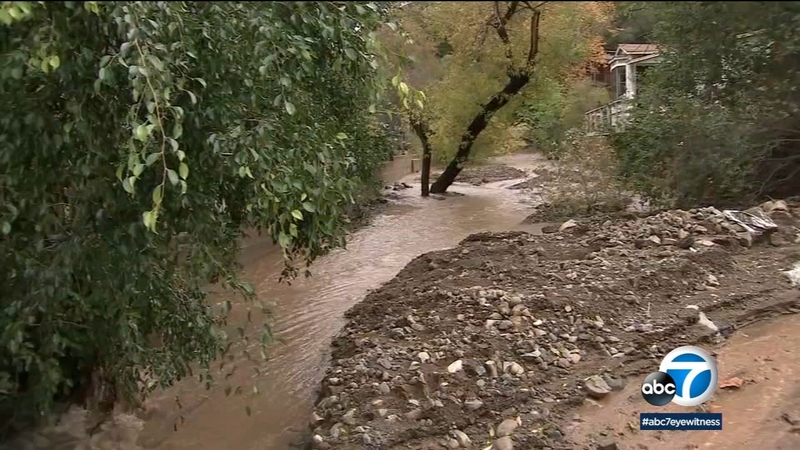 The downgrade went into effect at 10 a.m. for residents living in the Silverado, Williams and Modjeska canyon areas. Even with the downgrade, officials still warned of possible debris flows near the burn scar area.

Streets in the area that were closed overnight were reopened to local traffic only.

A map with detailed depictions of the areas impacted by the voluntary evacuation can be found at www.ocsheriff.gov/bondfire.

Last December, the Bond Fire kicked off a year of mudslides with each heavy downpour.

On Thursday, the Santa Ana River was so swollen from the rain that it went flowing through River View Golf Course. Plus, Knott's Berry Farm was closed due to the wet weather.

Though it certainly was a wet day across the O.C., the canyon communities thankfully dodged heavy rain.

The same areas were subjected to mandatory evacuations during last week's storm, and residents have since been clearing up the remnants of damage, including downed trees and muddy roads.

Thursday's rain created a watery mess at Union Station in Los Angeles - which remained open as travelers had to navigate streams of water.

This time around, residents were prepared for the worst, but the area didn't see any new major debris flows. However, the mess still remains.

Canyon residents say the creek floor has gone up about 10 feet, and now they're concerned about who is responsible for clearing it up before the next storm rolls in.

"The bigger issue we have is re-digging out the creeks behind me, re-digging out the main creek, which is 5, 6, 7 feet higher than it normally is, so that way the water, mud and dirt can kind of flow whenever we have rain. Otherwise, we're going to be dealing with this every time there's any sort of substantial rain," one resident said.

With the consecutive storms, he says he hasn't had much of a chance to properly shield his home from the rain.

"I couldn't start and I haven't started and I don't know when I'm going to be able to start," he said ahead of the incoming storm.

A representative from the Orange County Public Works told Eyewitness News that the agency is restricted from doing any work on private roads, and it is only responsible for public roads to clear the way for traffic.