A red flag warning signifying a high risk of wildfire is in effect in parts of L.A., Orange and Ventura counties Friday amid dangerous conditions.
KABC 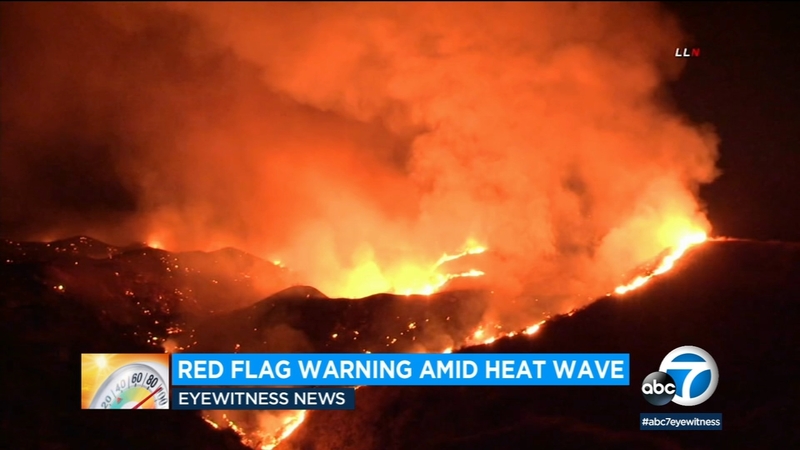 A red flag warning signifying a high risk of wildfire is in effect in parts of L.A., Orange and Ventura counties Friday amid Santa Ana winds, single-digit humidity and high temperatures on the final day of the region's latest heat wave.

Surface high pressure that has built into the Great Basin is helping to strengthen the offshore flow over L.A. and Ventura counties, generating a moderate Santa Ana wind event over the San Gabriel Mountains in both counties, producing winds of 35 to 45 miles per hour, said the National Weather Service.

"This combined with humidities lowering into the single digits will create several hours of critical fire weather conditions to this area,'' according to an NWS statement.

The warning comes as firefighters continue to battle a brush fire near Redlands that has charred over 125 acres. The blaze, which erupted Wednesday night, was 50% contained as of Friday morning.

So far this year, wildfires have burned 1.4 million acres across California amid hot, dry and windy conditions.

RELATED: California sets record after millions of acres burned so far this year

Northeast winds of 20 to 30 miles per hour with gusts of up to 45 mph will blow in the San Gabriels in and around the 14 Freeway corridor amid humidity levels as low as 6 percent. The warning replaces the somewhat less serious fire weather watch that was in effect Thursday.

"Hot temperatures may cause heat illnesses to occur,'' warned a weather service statement. "Those without air conditioning will be especially vulnerable during this extended heat wave. Drink plenty of fluids, stay in an air-conditioned room, stay out of the sun, and check up on relatives and neighbors.''