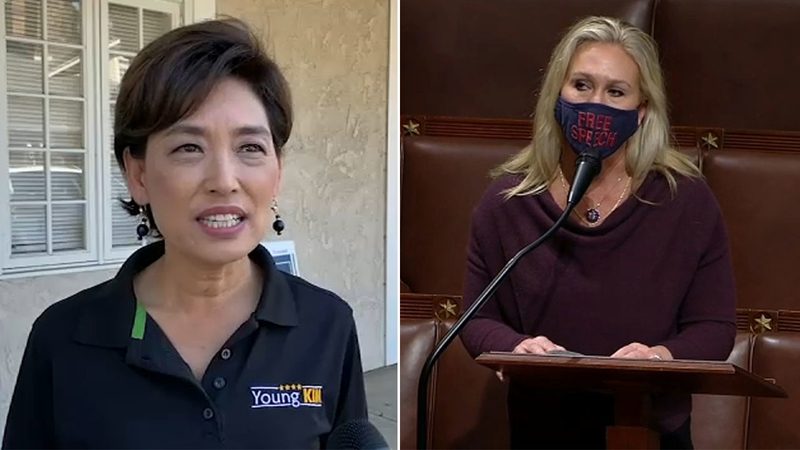 Congresswoman Young Kim was one of many lawmakers who voted to remove Rep. Marjorie Taylor Greene from two committees on Thursday -- but the only Republican from California to side with the mostly-Democratic move.

Nearly all Republicans voted against the Democratic move to remove Greene from her committee assignments with 230-199 votes.

Greene was on the Education and Labor, and Budget, committees.

"Antisemitism, conspiracy theories and threats should never be part of our political discourse. This should not be tolerated by either party. I came to Congress to focus on policy issues that unite our country and improve the lives of my constituents in the 39th District. Comments like what we've seen from Rep. Greene make that more difficult and are not what the Republican Party stands for.

"Rep. Greene's comments and actions, from spreading antisemitic conspiracy theories to questioning 9/11 and school shootings, are wrong in any context. I cannot in good conscience support this rhetoric in any way. House Democrats also should have held their members accountable when they made reprehensible comments.

"Our country needs to unite and work on policies to help the American people. We need to get people back to work, reopen small businesses and expand access to the COVID-19 vaccine. Just as I continue to show my commitment to working across the aisle, I hope Democrats come to the table to work with us. The only way we can get big things done in Congress is by working together."

Students who survived the Parkland, Florida, school shooting and families of the victims are calling for Georgia Republican Rep. Marjorie Taylor Greene's resignation, after comments surfaced that showed her agreeing with people who said the 2018 shooting was a "false flag" operation.