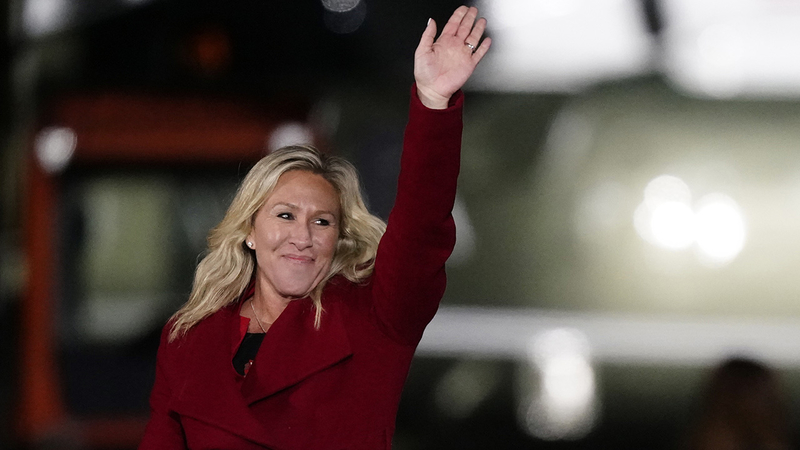 WASHINGTON -- Republican Rep. Marjorie Taylor Greene repeatedly indicated support for executing prominent Democratic politicians in 2018 and 2019 before being elected to Congress, a CNN KFile review of hundreds of posts and comments from Greene's Facebook page shows.

Greene, who represents Georgia's 14th Congressional District, frequently posted far-right extremist and debunked conspiracy theories on her page, including the baseless QAnon conspiracy which casts former President Donald Trump in an imagined battle against a sinister cabal of Democrats and celebrities who abuse children.

In one post, from January 2019, Greene liked a comment that said "a bullet to the head would be quicker" to remove House Speaker Nancy Pelosi. In other posts, Greene liked comments about executing FBI agents who, in her eyes, were part of the "deep state" working against Trump.

In one Facebook post from April 2018, Greene wrote conspiratorially about the Iran Deal, one of former President Barack Obama's signature foreign policy achievements. A commenter asked Greene, "Now do we get to hang them ?? Meaning H & O ???," referring to Obama and Hillary Clinton.

Greene replied, "Stage is being set. Players are being put in place. We must be patient. This must be done perfectly or liberal judges would let them off."

After CNN reached out to Greene, her personal Twitter account posted a statement in which she did not deny that she liked posts and replied to comments but claimed that many people have run her Facebook page.

Greene did not specify whether she or a member of her team were behind the posts reviewed by CNN's KFile.
CNN reached out to Pelosi's office for comment multiple times but did not receive a response.

Though her tenure in Congress has only lasted a few weeks, Greene is already facing calls to leave the House for her role in fanning the flames of the Capitol insurrection earlier this month after she objected to the election certification process and falsely insisted that Trump would remain president.

After Democratic Rep. Jimmy Gomez called on Greene to be expelled from the House for her role in the insurrection, Greene condemned the violence at the Capitol and falsely accused "Antifa/BLM terrorism" and Democratic politicians of stoking the insurrection.

"I fully condemn ALL violence. The Antifa/BLM terrorism funded on ActBlue rests with Democrat accomplices like @CoriBush @Ilhan @KamalaHarris @AOC @timkaine & many more... Those who stoke insurrection & spread conspiracies have blood on their hands. They must be expelled," she tweeted.

Last week Greene faced calls to resign from the survivors of the Parkland shooting survivors after Media Matters reported she agreed with comments calling the 2018 shooting a "false flag" operation, which refers to acts that are designed by perpetrators to be made to look like they were carried out by other individuals or groups.

CNN's KFile found additional comments from Greene where she called David Hogg, a survivor and activist, "#littleHitler" and spread a conspiracy that he was a "bought and paid little pawn" and actor.

Before she ran for Congress in 2020, Greene created a White House petition in January 2019 to impeach the House speaker for "crimes of treason," citing Pelosi's support of so-called sanctuary policies that "are serving illegals and not United States citizens" and because Pelosi did not support Trump's border wall.

In one speech, promoting the petition, Greene suggested Pelosi could be executed for treason.

"She's a traitor to our country, she's guilty of treason," Greene says in the video, which she posted on Facebook at the time. "She took an oath to protect American citizens and uphold our laws. And she gives aid and comfort to our enemies who illegally invade our land. That's what treason is. And by our law representatives and senators can be kicked out and no longer serve in our government. And it's, uh, it's a crime punishable by death is what treason is. Nancy Pelosi is guilty of treason."

In another Facebook Live broadcast from inside Pelosi's office on February 22, 2019, Greene suggested the House speaker will "suffer death or she'll be in prison" for her "treason." Notably, Greene never mentions a trial. In another broadcast from later that day, she suggested California Rep. Maxine Waters was "just as guilty of treason as Nancy Pelosi."
In the comments of her Facebook posts, often promoting the petition, Greene liked a comment that said "through removal or death, doesn't matter, as long as she goes," referring to Pelosi, and another that encouraged Greene to "beat Pelosi's ass."

The petition for Pelosi's impeachment and removal for treason amassed over 420,000 signatures as of January 2021.

On social media, Greene portrays herself as an opponent to political violence and casts Democrats as the real instigators of political violence, either real or imaginary, who get away with threatening calls for violence.

"Do any of you remember a day when talking about assassinating the President resulted in getting arrested? As in arrested in real life, not FB [Facebook] jail. When was that? Pre-2016 I think, right??? But if you are a conservative that's a different story!" wrote Greene in 2019.

While Greene notes in Facebook posts that she disavows and denounces violence, within the comment sections of Greene's Facebook page, commenters frequently cheer for politicians to be executed by hanging or firing squad.

Elsewhere on her Facebook page, Greene liked comments that advocated to "arrest" Obama and former Secretary of State John Kerry and one comment that said, "HANG that bitch," referring to either Obama or Kerry or possibly both of them. She also liked a comment that urged for "civil war 2.0" to begin.

Greene, who has embraced and spread the baseless conspiracy theory about a "deep state" working to usurp Trump's agenda, suggested in Facebook posts that FBI agents disloyal to Trump were traitors.

She liked a comment that said, "Trump already said there were some great ones working with FBI but some have fallen and quite frankly need to be hung for TREASON!" Another she liked said, "These Traitors need to be put to death as an example of what will no longer be tolerated in our country!!!"