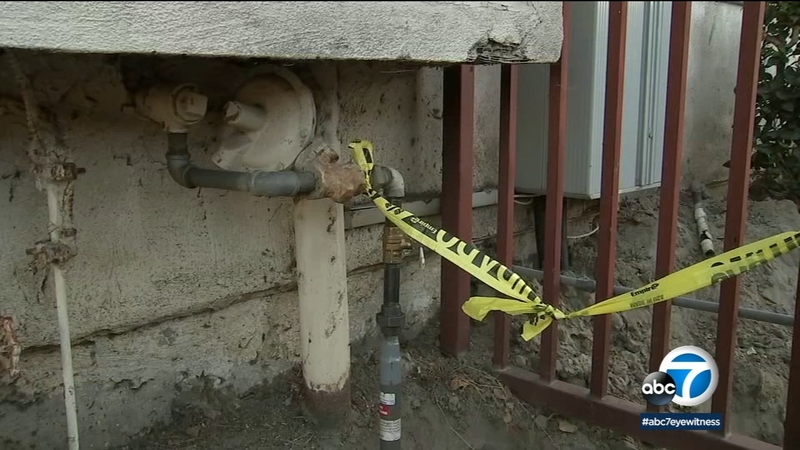 Residents of Cerritos complex without gas for over a month

CERRITOS, Calif. (KABC) -- A simple fix turned into a major problem for the residents of a Cerritos apartment complex.

Residents at the Four Trees complex have been living without gas and said their living conditions have been unacceptable for over a month.

Caution tape surrounds part of an ongoing repair project that has left residents at the complex in the cold.

"You have to get up in the morning. It's cold. There's no heat. You bathe in cold water," said Debora, a complex resident.

"I would really like for someone to talk to me, to explain what is going on. I would like to be compensated for the inconvenience because it's been horrible," Debora said.

The complex manager said the 72-unit complex suffered a major gas leak and the owners decided to replace all of the pipes, but workers hit a water line in the process.

The water is back on, but the gas remains shut off. The manager said he doesn't know when it will be turned back on. Residents said they've heard it could be another couple of weeks.

The apartment complex, which pays for heat and water, has discounted residents' rent but those living without gas say that's not enough for the major inconvenience.

"I would like to see them pay the rent or move us somewhere where we can cook. People have families and children here. They have to go out and spend a lot of money," resident Joyce Bell said.
Report a correction or typo
Related topics:
cerritoslos angeles countyapartment
Copyright © 2022 KABC Television, LLC. All rights reserved.
TOP STORIES
TX school shooting leaves at least 19 children, 2 adults dead
Uvalde school shooting: What we know about 19 kids, 2 teachers killed
Watch Steve Kerr's raw, emotional plea after Texas shooting
CA water board adopts ban on watering some green spaces amid drought
Matthew McConaughey: 'We must do better' after massacre in hometown
Biden to sign policing order on anniversary of Floyd's death
Texas school shooter bought 2 rifles within days of turning 18
Show More
'Lunchflation' is real: Returning to the office is costing a fortune
California moves toward allowing lawsuits over illegal guns
Suspect wounded after CHP, deputies are fired upon in East LA
Mater Dei HS celebrates 3 Heisman Trophy winners amid controversy
More water restrictions expected this summer
More TOP STORIES News