A Southern California woman and her two siblings had no idea they had another sister born in Vietnam until a DNA test came back with a match.
KABC
By Jovana Lara and Lisa Bartley 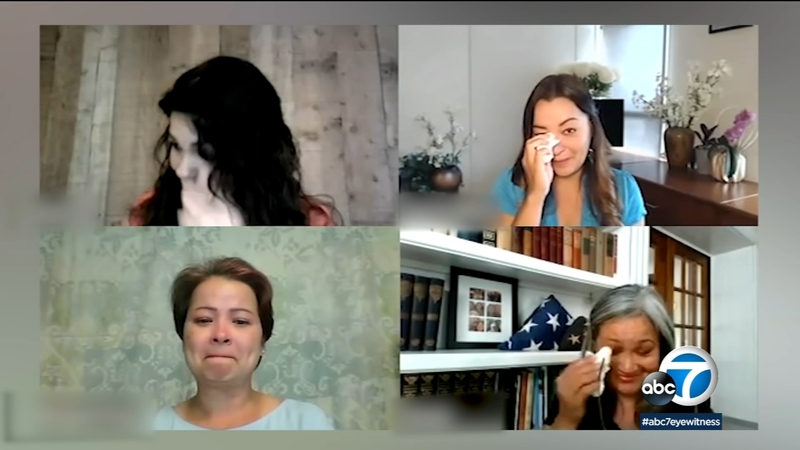 Long-lost sisters come together after nearly half a century

LOS ANGELES (KABC) -- Margaret Tran came into the world nearly alone. A child of the Vietnam War, her young birth mother gave her up to a stranger in Saigon when Margaret was just a few hours old.

The woman would raise Margaret as her own.

"She knocked on the door, my (adoptive) mom opened the door and she said, 'Do you want her? Can you take care of her?'" Margaret told Eyewitness News. "And so, she took me and held me in her hands and I was smiling at her. And she said, 'Well this is my lucky child, OK, I'm going to take her.'"

Margaret knew nothing of her fraught beginning until age 11, in 1985, when her adoptive mother applied to a program to bring children of the Vietnam War - born to U.S. soldiers - to America.

Margaret and her mom were interviewed as part of the process, and that's when Margaret learned for the first time that she was adopted.

"They literally told her, 'Tell me the truth Ms. Tran, that at 49 years old you cannot bear a child, so tell me the truth. Who is she? Where did you get her from?'" Margaret recalls.

Eventually, Margaret and her adoptive mother were able to begin a new life in the United States.

"Brooklyn, New York," Margaret remembers of their first stop on American soil. "I was like, oh my God, this is America!"

Margaret and her mother came to California soon after that. Margaret graduated from Garden Grove High School and later joined the Army Reserves. She had a deep love for her adoptive mother, but longed to know more about her birth parents. Did she still have family out there, somewhere?

"I did three or four different DNA tests and for 20 years nothing," says Margaret. "I always yearned for family love."

WAR RAGES, LOVE BLOOMS... AND THEN A FAMILY

Staff Sgt. Wayne Franklyn served eight years in the United States Air Force during the Vietnam War as part of the 46th Communications Squadron. He learned to speak Vietnamese so he could listen in on radio chatter from the North Vietnamese and pass intel on to his superiors.

Wayne met, fell in love with and married Mai, a young Vietnamese woman who was an orphan herself. Wayne helped Mai, 18, get her younger brothers out of an orphanage. The couple married in 1970 and had three daughters together.

"When Vietnam fell, my father took my mother and his three daughters -- my two sisters and I -- back to America," says Teresa "Tree" Franklyn, who lives in Southern California and works for ABC.

Lien Franklyn-Walt is the oldest of the three sisters and recalls the most of their early lives in Vietnam.

"What I remember most is always the beach, eating out, going to the market with my mom," says Lien.

"He did not like talking about the war," says middle child Wanda Warshauer. "He always wanted to go back there is what he told us."

The family left Vietnam for the United States in 1974 and spent years traveling the world for Wayne's work as a civilian contractor for the U.S. military. The three sisters had no idea a fourth sister, Margaret, ever existed.

MARGARET'S SEARCH FOR HER BIRTH FAMILY

Margaret's adoptive mother passed away in 2012, but Margaret, married now with two children, never gave up hope that she'd find her birth family.

Twenty years had now passed since Margaret took her first DNA test in 2000. No matches, nothing to go on.

"I asked my adoptive mother, she's up in heaven, I said, 'Mom, please help me,'" recalls Margaret. "And I think she answered my question, she was up there for real, she was helping me."

In June, Margaret finally received notification of a match from the DNA testing company 23andMe.

"I was like, first cousin - what does that mean?" recalls Margaret. "Parent, uncle and me and then Rebecca, cousin. It was like - oh my God, that's so close!"

Rebecca, it turns out, is Wayne's niece -- a first cousin to Lien, Teresa and Wanda.

"Aunt Sandy called me and said, 'Wanda - you need to sit down, I have something important to tell you,'" Wanda recalls.

"She shared that Rebecca had done the 23andMe and that it had connected with a first cousin who's half-Vietnamese, half-American... and it's not Lien, Wanda or Terry."

Margaret quickly untangled the family tree over Facebook once connected to Rebecca and reached out to the three sisters.

"And then Margaret messaged me," says Teresa. "In it, she specifically said - 'I'm wondering if Ms. Mai and Mr. Wayne are my parents and you three are my sisters?'"

It turns out, the four women share the same father - Wayne - but not the same birth mother.

"Margaret is younger than any of us, which means that my mom and dad were married and we have a little sister who is not my mom's," says Wanda. "So, you know, there was a little hanky panky going on."

The four women quickly connected over Facebook and within days were on a group Zoom call sharing stories and photos that show a striking family resemblance.

Their father, Wayne, passed away in 2013, but the women believe he had a hand in bringing them together now and see a piece of him in each of their smiles.

"My father... the Franklyn trademark are the dimples, we all have the same dimples," says Wanda.

"I always wanted sisters, now I have three - wow," Margaret said through tears on that first Zoom call.

"For so many years we don't have any relatives," Margaret tells Eyewitness News. "Just my mom, my husband and two kids - and a lot of holidays, we don't know what to do, anywhere to go."

Plans to meet in person are on hold until the sisters - scattered across the U.S. in California, Missouri, Connecticut and Maryland - can travel safely, but there's no doubt Margaret is now a beloved member of the Franklyn family.

"I just knew - you're ours... and ours forever," Lien tells Wanda. "We love you and we're so glad that you reached out."

"I just feel so blessed and happy about it," says Teresa. "It's almost like the universe is making up for all of the hell that's happened in the last six months."

Lien, Wanda and Teresa worried about how their mom, Mai, might react - but say, she immediately welcomed Margaret into the family.

"She said, 'Oh my God - look at her beautiful face. She looks just like you, how can I not love her?'" Wanda says Mai told her daughters.

"I can't believe 47 years later, I finally found my family," says Margaret. "I was screaming out loud to the whole world - and I was like - thank you universe!"

Margaret is still searching for her birth mother, who she only knows is half-Vietnamese and half-Cambodian. But now, she'll search with help from her three new sisters and the big family she always dreamed of.