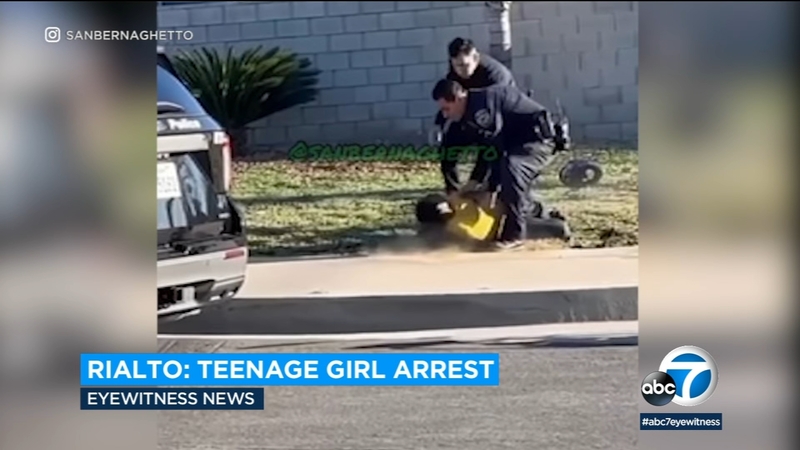 RIALTO, Calif. (KABC) -- A family has taken the first step toward filing a lawsuit after video showed a 16-year-old girl being thrown to the ground by a Rialto police officer during a violent arrest earlier this month.

The family's lawyer has filed the documents necessary to begin the process of a lawsuit.

The arrest happened Feb. 11 around 4:08 p.m. after the teen had been stopped for speeding on an unlicensed mini-bike, according to Rialto police.

An investigation was launched after footage of the arrest showed one of two officers at the scene tossing the girl to the ground and then appearing to grab her neck.

"I was in tears. She was crying out, and I wasn't there to help her," the teen's father Demetrio Jennings said at a press conference in front of the Rialto Police Department Monday afternoon.

A cellphone video that shows an apparent forceful arrest of a 16-year-old girl has sparked a Rialto police investigation.

"I didn't get there fast enough ... Try to teach my kids to do the right thing, you know, but she was violated," Jennings added.

Last Tuesday, Rialto Police Chief Mark Kling issued an apology to the girl's family after saying he reviewed bodycam video of the incident.

"I have personally viewed officer body worn camera footage and although the video depicts the juvenile resisting officers, we are investigating the officer's decision to trip the juvenile to the ground and later placing his hand on the juvenile's throat during the arrest," Kling said in a statement.

"We apologize to the juvenile's family regarding these unfortunate circumstances," Kling's statement also said. "At a time when our police department strives to build community relationships, we certainly fell short in this encounter. We look forward to building rapport with this family now and in the future."

Kling said he requested an independent investigation by the San Bernardino County District Attorney's Bureau of Investigations, and ordered an internal affairs investigation into the officer's actions.

Police say the teenager was being uncooperative and refused to provide her last name or address, so they could not give her a citation after she was stopped.

When being taken into custody, the video captures the officer saying to the girl, "Did you just try to bite me?"

She was charged with resisting arrest by threat of violence, and was released days later from a detention center and reunited with family.

The family's attorney Caree Harper did not address the biting allegations at a news conference last week, but did call for the officer to be relieved of his duties.

The officer involved has been placed on paid administrative leave.