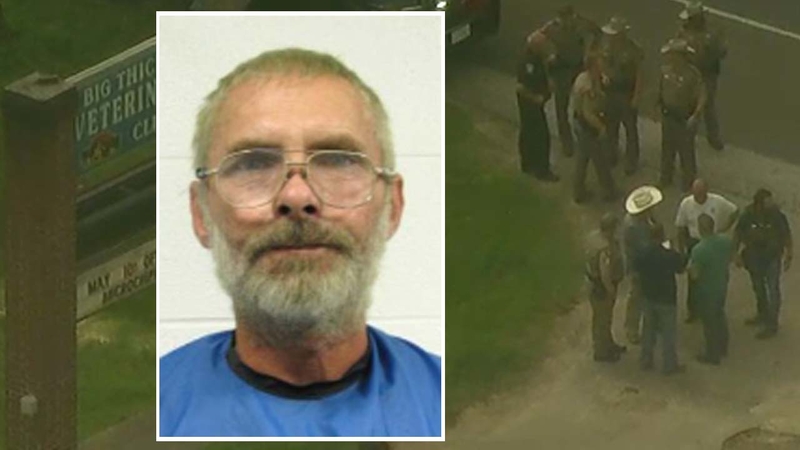 The man accused of shooting four people, including a Liberty County sheriff's deputy, and killing two of them has been found dead from a self-inflicted gunshot wound.

The manhunt for 65-year-old Pavol Vido had been underway since around 7 a.m. Authorities confirmed that he shot himself just after 2 p.m.

According to Justice of the Peace Ralph Fuller, the second victim, identified as David Grubbs, has also died.

His brother, Chris Grubbs, who was also shot, has since been removed from ICU.

Officials say it all started at B Dependable Plumbing on Highway 321, where 65-year-old suspect Pavol Vido waited for two employees and then shot them.

Vido left the scene and pulled into the parking lot of Big Thicket Veterinary Clinic. Deputy Richard Whitten followed him, and the two got into a shootout.

Deputy Whitten was shot in the throat at a veterinary clinic. He was flown to the Texas Medical Center.

At the time, Capt. Ken DeFoor with the Liberty County Sheriff's Office said Deputy Whitten was alert and responsive.

However, Thursday morning, officials said the deputy is in critical condition due to complications.

SEE ALSO: What we know about deputy injured in Liberty County shooting

NEW SUSPECT PHOTOS: this is Pavol Vido, 65. I’d you see him, DO NOT approach. Investigators say he shot 4 people, killed one woman. #abc13 https://t.co/LDqPeu045z pic.twitter.com/UJfw5T3uxC

According to preliminary information from officials, Vido was living in a metal container behind the plumbing business.

In the last month, the sheriff's office served Vido eviction papers.
The people who own the land where Vido was living are connected to the plumbing business, authorities say.

ARMED AND DANGEROUS: What we know about suspect in deputy-involved shooting

ATF, DPS, police, deputies, with guns and dogs searching the plumbing property. Three people were shot inside B Dependable Plumbing. The woman is dead. Unknown how two men are doing. #abc13 https://t.co/LDqPeu045z pic.twitter.com/7u4NwlqL4n

Seven Cleveland ISD schools were in lock-in mode due to the shooting investigation.

Tarkington ISD was also on lockdown as a precaution.

Those have all been lifted.

According to officials, the shooter, identified as Pavol Vido, was living in a metal container behind the business.

The Liberty County Sheriff's Office posted more information about Whitten, who became a deputy in June 2015.

Whitten is a lifelong resident of the Cleveland area. He's been married for 14 years and has two children, who are 22 and 25 years old, the sheriff's office said.