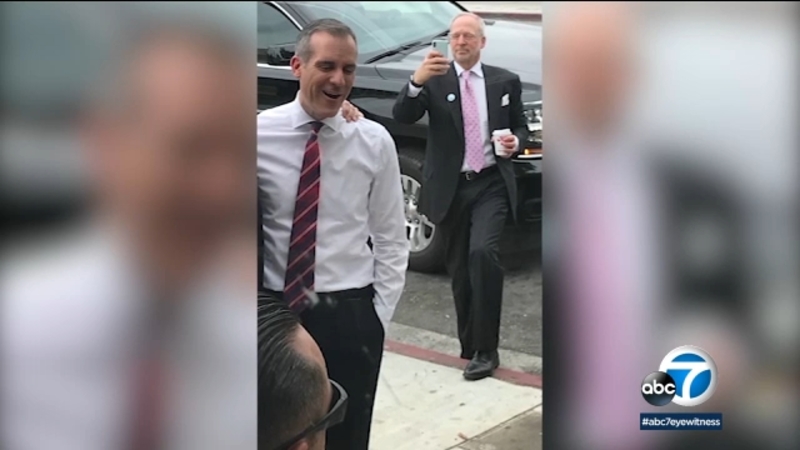 Jacobs hasn't been a city employee since 2016, but still was doing political and nonprofit work for Garcetti.

Monday night, journalist Yashar Ali - who used to work for Gavin Newsom when he was mayor of San Francisco - accused Jacobs of roughly a dozen instances of sexual assault over a 10-year period from 2005 to 2015.

By Tuesday afternoon, the mayor and Jacobs both issued statements saying he would take a leave from doing his work with the mayor.

"I take seriously all allegations of harassment. Rick Jacobs has stepped away from his non-profit and volunteer political work," Garcetti said.

Jacobs also issued a statement: "For the past seventeen years, I have dedicated myself to advocacy and public service. I do not want this to be a distraction. Therefore, I will take a leave from my non-profit work and my volunteer political work with the Mayor."

That came after Ali detailed his own alleged experiences with Jacobs.

1. BREAKING: 24 hours after I published this story, @ericgarcetti has issued this statement about his top advisor Rick Jacobs:

"I take seriously all allegations of harassment. Rick Jacobs has stepped away from his non-profit and volunteer political work." https://t.co/iNGhYGon6H

"He would forcibly kiss me on the mouth, on the lips and he would do this thing which I hate to call a hug because it's not a hug. It was like he was interested in crushing the life out of you. My body language was enough to give an indication of how unwanted his behavior was," Ali said.

In a statement, officer Garza's lawyer Greg Smith said "As this lawsuit progresses, we believe more victims will feel the moral obligation to come forward and speak the truth. Yashar Ali is only the most recent victim to speak out. Every person should feel free from fear and intimidation when reporting sexual assault and harassment, especially in the workplace."

Garza alleges Garcetti would laugh at some of the comments, but not stop the behavior. Ali, who says he doesn't plan to file a lawsuit, claims the same.

"According to my sources, Mayor Garcetti has repeatedly seen Rick behave in the way that Rick has behaved towards me and towards officer Garza, meaning that Rick was engaging in sexual harassment and sexual misconduct and assault in front of the mayor and the mayor has either laughed it off or not done anything about it," said Ali.

After the Garza allegations surfaced, Jacobs called them pure fiction and Garcetti's spokesman said the mayor has zero tolerance for sexual harassment and did not witness the behavior Garza alleges.