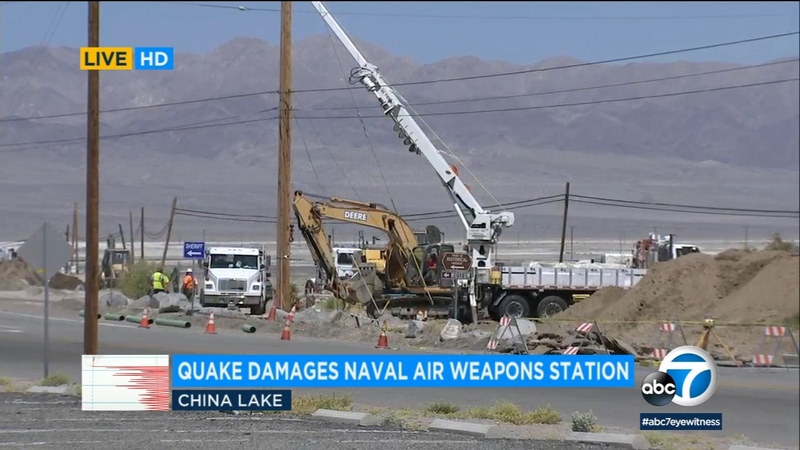 CHINA LAKE, Calif. (KABC) -- Power and gas have been restored, but residents of Trona are still without running water following two powerful earthquakes near Ridgecrest.

Utility crews remain busy working in Trona to restore sewer lines and running water. County officials have responded to the emergency by bringing in bottled water, in addition to portable showers. The National Guard is helping fill water containers and provide other vital assistance.

"The response to how to get water to our community has been .... I don't even know how to describe. Amazing. Grateful. Plenty of water to go around. Except for using the shower and stuff," said one local resident.

The local library has been set up as a cooling center, where residents can keep out of the heat, while using the Wi-Fi and of course browsing the collections.

A local assistance center and medical center will be established at the high school in Trona starting Wednesday. In addition, a town hall is scheduled at the school 10 a.m. Wednesday.

The nearby Naval Air Weapons Station China Lake was also hit hard by the quakes. The station is still "not mission capable," officials say, though its weapons remain secure.

The station sustained significant damage after the back-to-back temblors on July 4 and 5. The second, larger one was measured at magnitude 7.1.

One of the hardest hit areas on the base was the commissary, where ceiling tiles had come crashing down and products that were on shelves had been scattered across aisles. Significant damage can also be seen at the chapel, where major cracks tore open parts of a wall and religious figurines had been cracked. Services at the chapel have been suspended.

The station is working to reopen its facilities as building damage is assessed.

The U.S. Geological Survey confirmed the epicenter of the quakes was on two faults located at the Naval site, the station said in a statement. A team from the USGS was on site studying the impact, according to a Facebook post from the base.

Base officials authorized the evacuation of non-essential personnel on the 1.2-million acre facility last week.

Weapons at the Naval Air Weapons Station China Lake are secure, but the base is "not mission capable" following two powerful earthquakes near Ridgecrest, officials said.

"The base continues to assess damages to infrastructure aboard the installation and continues to allow access for MISSION ESSENTIAL PERSONNEL ONLY; however, security protocols remain in effect. Safety of personnel is currently the highest priority," the base posted in a statement on Facebook.

Meanwhile, a team of architects will be inspecting structural damage at nearby Richmond Elementary School, which was left in shambles and is set to open in six weeks.

"Mechanical damage, you can see cracks in the floor, we've got water damage, electrical," Sierra Sands School District Superintendent Dave Ostash said. "What we don't know yet is the extent of structural damage."

The largest aftershock Tuesday morning was recorded as a magnitude 3.6.