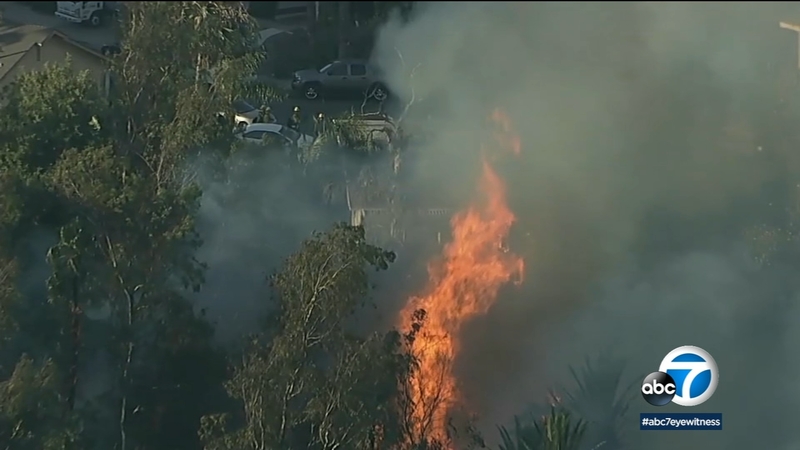 JURUPA VALLEY, Calif. (KABC) -- Fire crews are working to put out a brush fire that broke out Friday afternoon amid strong winds, and threatened multiple structures in Riverside County.

The fire was reported shortly before 6 p.m. in the area of Limonite Avenue and El Palomino Drive in Jurupa Valley, near Riverside.

There were no evacuations. A nearby senior living facility was ordered to shelter-in-place.

The fire extended to a Rite Aid store nearby where firefighters held it to the roof of the building, according to officials.

Heavy smoke could be seen for miles as flames, fanned by 15-20 mph winds, burned in a neighborhood densely populated with trees and vegetation.

The Palomino Fire is holding at two acres as of Friday night, according to CAL FIRE. The agency says that two people, including a firefighter, suffered minor injuries and were taken to the hospital.

Fire crews are battling a brush fire that broke out Friday afternoon amid strong winds, and is threatening structures in Riverside County.

At least two water-dropping helicopters helped with the aerial attack of the fire as ground crews worked to protect nearby structures, and douse the flames.

Jurupa Valley resident Megan Jebaili was shocked when she saw flames approaching her yard. Her sons and several of their friends grabbed water hoses.

"It was terrifying, panic attack! Jebaili said. "I had boys getting stuff out of the house. Boys protecting the house. It was super scary."

Homeowners told Eyewitness News that the thick brush on the river bottom has been a cause of concern for years. Another fire caused damage in the same area four years ago.

Firefighters will stay in the area overnight putting out hot spots.