Family mourns 22-year-old killed in DTLA road rage incident, pleads with suspect to turn self in 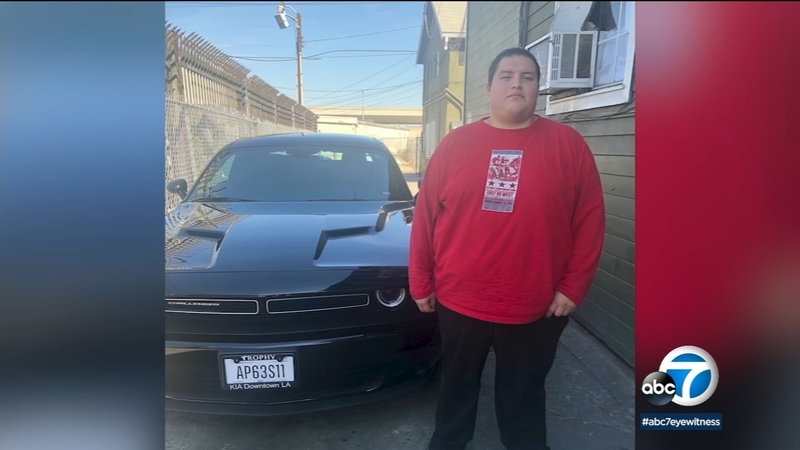 DOWNTOWN LOS ANGELES (KABC) -- The family of a man who was killed after a car crash in downtown Los Angeles turned into a road rage incident is pleading with the suspect to turn herself in.

Those who knew him remembered him as a man who was focused on his family, working two jobs to provide for his parents and four sisters.

"He was the best person you could ever meet - so inspirational, so motivated to live life," said his sister, Kristal de Marcos.

Police say the incident began as a "fender bender" Thursday night at 17th and Broadway. Angel and the other driver stopped briefly and exchanged words but then the woman took off in her car - and Angel gave chase in his.

They stopped again at 18th and Figueroa and again engaged in a confrontation.

At some point, Angel ended up on the hood of the woman's car as she drove away. She made a sudden left turn at a high rate of speed, throwing him off the hood and into the street.

After a minor collision in downtown LA and a confrontation between two drivers, a man wound up violently thrown off the hood of a car and died, police say.

His longtime girlfriend, who was in the car with him, witnessed everything.

"It's just heartbreaking. And then to see the person that you love so much there on the floor, unable to do anything, it hurts even more," said Alejandra Perez.

A GoFundMe page has been set up to help the family, as they plead for the driver to do the right thing and turn themselves in.

"That person had no heart. All I want right now is to bring justice for my brother's death because the way he died was just not it," his sister added.

Police say the suspect is described as an African American woman in her 20s with multicolored hair, and was driving a 2013 silver Kia Optima. Investigators with the Los Angeles Police Department are asking for the public's help tracking her down.