Video captures the frightening moment a driver slammed into a vehicle and hit two people in Cedar Glen near Lake Arrowhead.
KABC
By Marc Brown 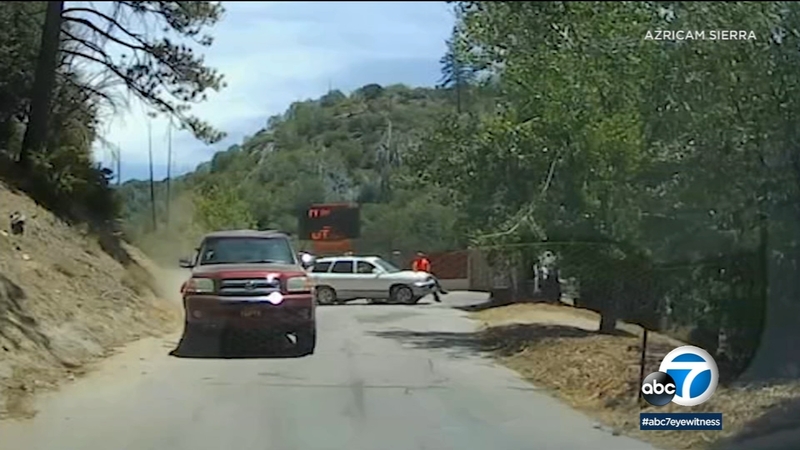 A driver in a white SUV is seen ramming into a red pickup truck multiple times, and as the truck flees, the SUV hits two men standing in the roadway.

Moments later, the SUV takes off, racing after the red pickup. The incident was captured by another driver's dashcam.

A witness drives up to see what he can do to help as one of the injured men kneels down and tries to catch his breath.

The San Bernardino County Sheriff's Department says the incident unfolded in the 30000 block of Hook Creek Road Sunday at about 1 p.m.

Authorities say the two men run down are father and son who had been in some kind of dispute with the driver of the SUV.

"The victim was drug under the vehicle and both the victim, and his father sustained injuries and were transported to the hospital," authorities said in a statement.

They say the driver of the red pickup had no connection to the argument and was just in the wrong place at the wrong time.

The suspect fled the scene and was detained shortly after.

The driver of the white SUV was identified as 37-year-old Robert Crain of Hemet. Deputies say when he turned his SUV into a weapon, he had his wife and two children in the vehicle.

He is charged with attempted murder and child endangerment.