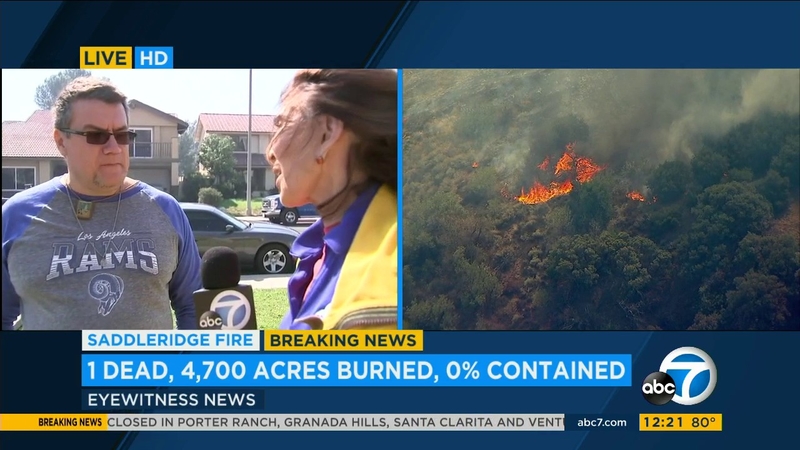 SYLMAR, LOS ANGELES (KABC) -- A Sylmar man believes he saw the initial stage of the Saddleridge Fire burning at the base of an electrical tower behind his home Thursday night.

Roberto Delgado says it was a "miracle" his home was spared as the flames raced down the hillside, sending embers shooting over his roof.

He and his wife first noticed the fire around 9:30 p.m. at the base of an electrical transmission-line tower in the hills behind their home.

At the time, it was relatively small - but it was fanned by powerful winds and grew quickly.

"We immediately ran downstairs, went to the backyard, pulled out the hoses," Delgado said. "I was dialing 911. The fire just came down so quickly."

More than a dozen firemen arrived at his home and ran onto his property to battle the blaze. But the wind was so strong blowing the flames that they had to retreat, he said.
EMBED More News Videos

A Sylmar man believes he saw the initial stage of the Saddleridge Fire burning at the base of an electrical tower behind his home Thursday night.

He and his wife ran through the house to close windows and grab their dog before they evacuated.

"We left in tears thinking our house was going to burn down," he said. "By a miracle the house is still here. Somehow those flames didn't touch our house."

The Saddleridge Fire has burned through more than 4,700 and prompted evacuation orders for 25,000 homes in the Sylmar, Granada Hills and Porter Ranch area.

It is not determined yet whether the start of the fire was linked to the electrical lines. Fire officials have not officially determined a cause or the origin point of the Saddleridge fire, but they believe it started around 9 p.m. in the area of the Yarnell Street exit of the 210 Freeway.

Fire investigators have been in the area all day Friday, talking to witnesses and property owners. Southern California Edison confirmed it owns the transmission lines but said it has no information about the start of the fire.

Power lines have been blamed for half of the 10 most destructive wildfires in California in the last four years.