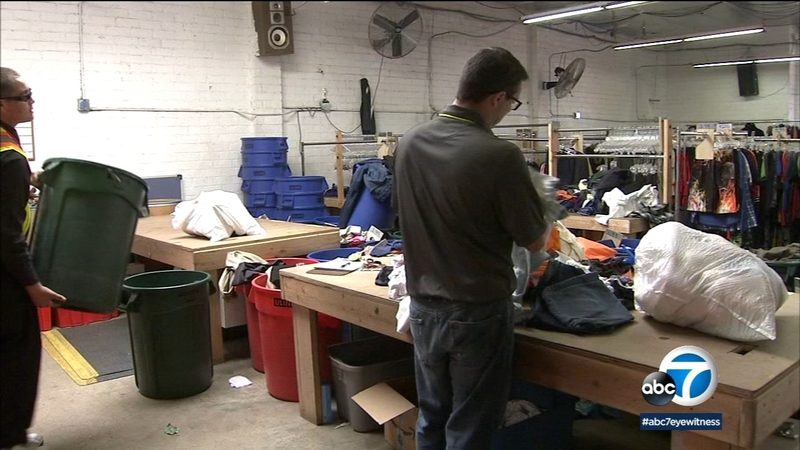 The Salvation Army: Giving kids their parents back

LOS ANGELES (KABC) -- As cities across Southern California try to tackle addiction and homelessness, the Salvation Army wants more people to take advantage of its free drug and alcohol rehab program. It has a success rate nearly double the national average.

The goal is to give people suffering from addiction time to detox, and something else to focus on. One facility in Santa Monica can house 52 men at a time. The six-month inpatient program has a barbershop, a small library, a chapel and a cafeteria. There are similar facilities in Pasadena and Anaheim that are even larger and serve women as well.

Roughly half of all homeless people are addicted to either drugs or alcohol. The Salvation Army says a key part of the program is what they call "work therapy."

"We definitely give them something to do. We have their work therapy assignments. And that allows them to get out of themselves for eight hours a day and not think about using, not think about doing drugs, but finding purpose in their lives," said Lt. Timothy Pemberton with the Salvation Army.

That work includes sorting donations people drop off every day. Focus on something other than getting high.

"The work isn't always easy, but no work actually is. It actually helps me train myself to get up in the morning, get dressed, become responsible, in order to become a valuable member of society," said Steven Stoltz, a graduate of the program who now works at the Salvation Army full-time.

The Salvation Army says its program has a success rate of about 34%, which is better than most rehab facilities.

"We have a six-month inpatient program and we have to get some time under the guys' belts from the last time they used alcohol or used drugs," says Pemberton. "The longer that they have in recovery, the longer they have sobriety the better chance they have of succeeding."

The Salvation Army is known for its homeless shelters and soup kitchens, but the adult rehabilitation program is meant to be much more than just a safe place to eat and sleep. It's about dealing with the whole person and helping them heal -- mind, body and soul.

And while the homeless are certainly welcome, the Salvation Army says its treated police officers, doctors, lawyers and former football players.

The Salvation Army is a faith-based Christian organization, but they are open to people of all faiths or no faith at all. They do not discriminate against those who are LGBTQ. If you want help and there's space, you are welcome. For more information, visit https://santamonicaarc.salvationarmy.org.
Report a correction or typo
Related topics:
community & eventslos angeles countyhomeless in southern californiaaddictionsalvation armyhomelessalcohol
Copyright © 2022 KABC Television, LLC. All rights reserved.
TOP STORIES
Suspect abandons SUV in downtown LA after high-speed chase
Police capture murder suspect after large-scale search in NoHo
Rapper Drakeo the Ruler's family announces wrongful death lawsuit
Possible shooting shuts down stretch of NB 110 in South LA
Woman who molested 10-year-old as teen sentenced to juvenile facility
Family of man fatally shot by Tustin police files lawsuit against city
Gunman shot wounded man in head while victim was on phone with 911
Show More
Tioni Theus case: Teen found dead on side of 110 Freeway laid to rest
LA County COVID hospitalizations continue to decline
Man who sparked probe into Kobe Bryant crash photos speaks out
Boyle Heights school to host NFL's Play Football Family Festival
Free N95 masks arriving at pharmacies as early as Thursday
More TOP STORIES News