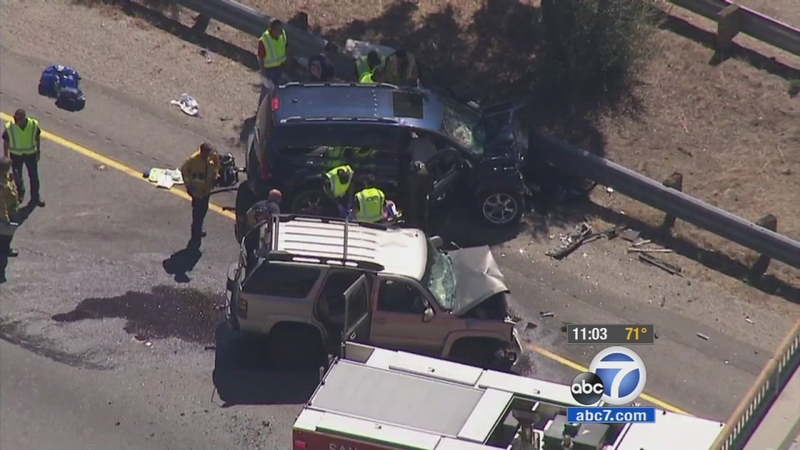 On Saturday, the coroner's office identified the suspect as Nicholas Alan Johnson, 32, of Fontana.

Two cars were involved in the crash near Palm Avenue. A man and a 13-year-old male were treated and released from the hospital. An adult female, believed to be the man's wife, remains hospitalized and is recovering from her injuries.

The suspect was wanted in connection to a prior home-invasion robbery in Fontana. Authorities recognized the suspect's beige Chevrolet Tahoe on Friday around 12:49 p.m. and attempted to conduct a traffic stop when a chase ensued.

The suspect led authorities on a chase through surface streets in Fontana and San Bernardino before he started driving the wrong way in the northbound lanes of the 215 Freeway. At one point, the suspect sideswiped another car.

The suspect reached speeds as high as 100 mph, according to Deputy Olivia Bozek with the sheriff's department.

Deputies inside a sheriff's helicopter realized the suspect was a threat to the public's safety and began firing shots at his car. He then bailed out of the moving vehicle, which then crashed head-on into a blue Dodge Durango.

The suspect eventually collapsed on the side of the road not far from the crash and died. Authorities said the suspect was struck by gunfire but were not sure if his death was caused by the gunshot wound.

Police said an autopsy will be performed to determine the cause of death.

Some drivers questioned the police decision to shoot from the helicopter.

"That's dangerous. Like how did they know they were going to hit that car, you know?" said Clarice Tenny of Victorville.

"If a guy's fleeing, going the wrong way on the freeway, bad things are going to happen," said Richard Allinson, a visitor from Texas.

Jodi Miller of the San Bernardino County Sheriff's Department said all deputy and tactical flight officers have been actively training from the air since the mid-80s, and this is the seventh shooting of its kind since 2001 in Apple Valley.

"Regarding training, all of our deputies/tactical flight officers qualify with the same weapons that they carry in the aircraft through and within department qualifications," said Miller in a statement to ABC7. "Additionally, they train from the air every 90 days at a minimum. This training is specific to deploying weaponry from the aircraft."

The investigation was ongoing. Officials said anyone with information regarding the incident is urged to contact Detective Chuck Phillips or Sergeant John Gaffney of the Specialized Investigations Division, Homicide Detail at (909) 387-3589.