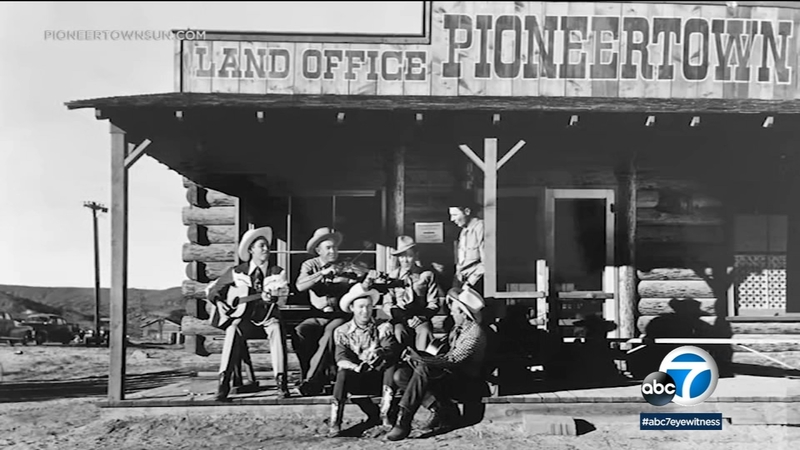 PIONEERTOWN, Calif. (KABC) -- There's a new film festival riding into Southern California, and this one celebrates Westerns -- new films, old classics, shorts and even the animated.

The Pioneertown International Film Festival will take place in a town where many Westerns have called home, or home on the range.

"We really thought that we want to celebrate what the history of that town was and look at the past, and also just see if we can't bring it into the future and see what the future of westerns are, and where the genre's going," said Julian T. Pinder, founder of the Pioneertown International Film Festival.

Welcome to Pioneertown in San Bernardino County. It's just about 120 miles or so from Los Angeles and north of Palm Springs.

It was designed and built back in 1946 as a real town that could also work as a showbiz set.

Actor Dick Curtis, who often played a heavy, and the heroic Roy Rogers, are two of Pioneertown's founders.

In the late 1940s and early 1950s, they and others shot a lot of Western movies and Western TV shows right here.

Pinder is bringing the Western back to Pioneertown with the inaugural Pioneertown International Film Festival.

"We're pretty excited because we've got this slate of, you know, films from everywhere from the Ukraine to, you know, Western Europe to South America to Canada," Pinder said. "I mean, we've got this program of films that represent a kind of new wave of the Western genre.

Ukraine's "The Inglorious Serfs" adds samurai swords into the mix.

"Swamp Lion" tells the story of a Texas father who begins trafficking drugs to pay for his son's cancer treatment.

"And With Him Came the West" is a documentary about Wyatt Earp.

"We're also not going to shy away from the dark patches in the history of the Western genre," Pinder said.

"The Last Manhunt" re-tells the story of Willie Boy -- once seen as a drunken Indian murderer who lusted for a teenage girl.

Here, the story is given back to the native community, now a tragic love story co-starring Jason Momoa, who also has a writing credit.

"I think the purpose of Jason doing this film, beyond making a film or something beautiful, is to open the discussion about what is true and what is not," said Christian Camargo, director and co-star. "What is the white man's relationship to the Native community? Native community to the white man? An open dialogue, and get to the truth."

One goal here is to usher in a new generation of Western films told from new perspectives.

"In years to come, we really want to be at the forefront of that and be helping to usher new talent in, and indigenous voices and more female voices in the Western genre, and, you know, see where that's going to go," Pinder said. "It's really exciting because there's a future for it, you know?"