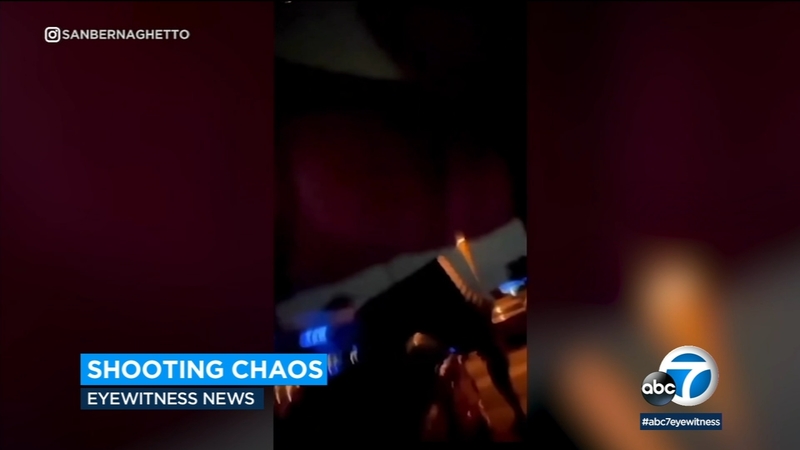 SAN BERNARDINO, Calif. (KABC) -- A man was killed Friday night while eight other people were injured during a shooting at a party in San Bernardino. Now, new video posted to social media could help investigators.

Outside THA Blue Flame hookah lounge, the door is padlocked and the business is red-tagged.

A single bullet hole serves as a reminder of the violence that unfolded on May 20 when gunfire erupted.

Kobe Lott was working security the night of the shooting.

"We just out here, everybody chilling. You don't see nothing like, ain't nobody arguing, ain't nobody fighting," Lott said. "Then out of nowhere shots just rang out, and everybody just take off."

However, police say an argument between two people inside the bar led to the shooting.

Investigators are now hoping to speak to the person who recorded a video during the shooting and uploaded it to Instagram. In it, several gunshots can be heard and the terror of those caught in the deadly chaos.

They say more than 100 people gathered at the lounge for what police call an unpermitted party.

Allen Grisham Jr., 20, was fatally shot and died at the scene. Eight others were wounded.

"So when the shots go off, I get behind one of the cars that's parked right here, and once they slowed down and stop, I started going to the people who were shot," Lott said.

As a makeshift memorial begins to grow, family members and loved ones are remembering the 20-year-old killed during a shooting at a party in San Bernardino.

Police detained two individuals while attempting to secure the scene initially, one of which was arrested for being in possession of a loaded stolen firearm, and the other for outstanding warrants, the San Bernardino Police Department said. It was not immediately cleared if those detained were suspects in the shooting.

A description of the suspect or suspects was not available.

Family and friends of Grisham placed candles, flowers and balloons to mark the spot where he died.

On Sunday morning, Angel Chavez came to pay his respects to his former classmate adding to the growing memorial.

"I saw everyone was coming to put candles, so I wanted to come down and put my respects, and just put a little thought to it because it's just crazy how it happened," Chavez said. "It should not have happened like that."

A family friend who knew Grisham and his father for years drove from Las Vegas, and had a message for the suspect.

The San Bernardino Police Department is searching for the suspects responsible, and is asking the public for information. In addition, police say they are working to shut down the business whose illegal activity led to the shooting.