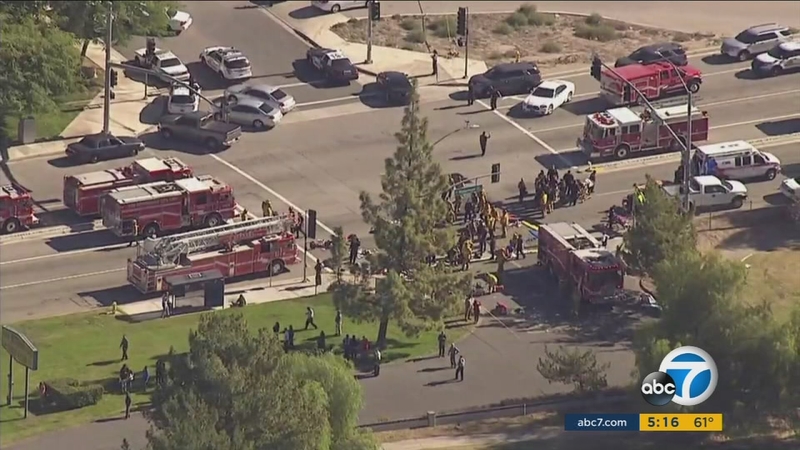 SAN BERNARDINO, Calif. (KABC) -- A year after the deadly San Bernardino terror attacks, residents of the neighborhood where the attackers were killed in a police shootout recalled the frightening experience.

When bullets started flying on Dec. 2, 2015 people going about their day suddenly found themselves in the middle of a gun battle.

From inside their homes, or while driving along East San Bernardino Avenue, multiple cellphones began recording as police zeroed in on terror couple Syed Farook and Tashfeen Malik.

"We were hearing the bullets hitting, or rounds hitting off the walls," said witness David Espinoza.

Espinoza was at work when he first heard sirens and began rolling on his cellphone. He captured the exact moment Malik opened fire on police.

But it's the look he saw on the man driving the black SUV that is seared in his memory.

"His face just said it right there like, 'This is the end.' I always picture that face lately, for the past year," he added.

East San Bernardino Avenue, less than two miles from the Inland Regional Center, is where the couple made their last stand.

Earlier that day, they had killed 14 people and wounded 22 others.

Helen Medina was home watching the news coverage when her neighborhood became a war zone.

The 88-year-old was alone and terrified.

"I hit the floor. I could hear the bullets flying," she said.

Across the street, Lidia Dumitru and her adult children also hit the floor. She said they emerged an hour later to law enforcement swarming their street.

Victoria Landeros was home with her daughter and said she didn't hear the gunfire at first.

"She says, 'Call 911, they are shooting up front.' Operator says, 'Stay indoors, do not go outside,'" Landeros recalled.

It took a week for law enforcement to collect and document the evidence.

A year later, life along the busy stretch of roadway is back to normal, but the neighborhood still bears some visible marks - from Landeros' front window, to the holes and gashes left by the hail of bullets.

But the emotional scars are less visible.