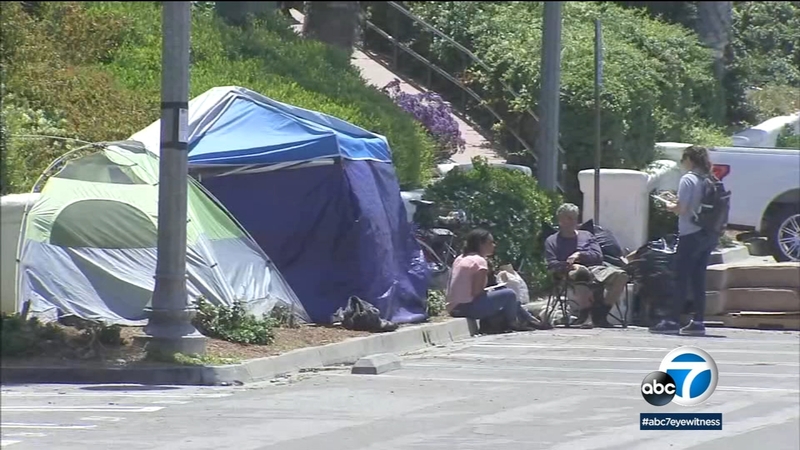 SAN CLEMENTE, Calif. (KABC) -- San Clemente locals were excited Friday to see what they called a growing safety and health hazard moving out of North Beach.

Locals Lisa Edone and Gene James watched as vans and trucks with the city of San Clemente drove homeless people and their things out of the parking lot.

"It's an important first step, but it's just a baby step," Edone said.

"This is an eyesore and these citizens here have had enough," James said.

One man who asked to only be identified as Jim said he set up his tent here because he knew he wouldn't get a citation.

"No trespassing tickets is the only reason we're here. Trust me, we don't want to be here anymore than anybody else wants us here," Jim said.

Another homeless man who goes by Nick said he is a Navy veteran and that it was obvious he was not welcome here because as of the last month, people have, "burnt a hole in my umbrella, part of my camp, they've driven by throwing things at us from eggs to great big washers. There's a lot of hate in this community and it's not good."

A new urgency ordinance adopted this week by the city allowed for a designated campsite two blocks away with security, running water and bathrooms. Now, deputies with the Orange County Sheriff's Office can enforce the no camping rule here in North Beach.

Personnel with the Orange County Health Care Agency were there Friday reaching out to the people camping individually to assess their situation. They wanted to see whether those individuals suffered from mental illness and what sort of help they needed.

Steven Gustafson said he was happy to have another location to head to.

"I'm so happy to get out of this parking lot. I don't want to be here. That's a good place to go. As far as I'm concerned, it's the best thing that I could expect," Gustafson said.